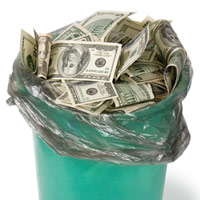 US stock markets closed markedly down on Monday, following a massive but expected sell-off. Late Friday, Standard & Poor's downgraded the United States' coveted AAA rating to AA+. Even the sturdiest of tech stocks couldn't avoid being collateral damage that stripped billions from their valuations.

For example, Apple's market cap was $327.46 billion, down from  $337.04 billion during mid-day trading that already had sapped billions in valuation and reversed gains against Exxon Mobile. The energy giant is the most valuable company as measured by market cap of $345.76 billion. Still, it's likely that barring some utter catastrophe Apple's valuation could top Exxon's before iPhone 5 ships.

The Dow closed down 5.6 percent -- that's 635 points. Nasdaq fell by 6.9 percent, while most major tech stocks trading there fell less, including Apple, Google and Microsoft. Dell and Oracle -- down 7.37 percent and 8.22 percent, respectively -- were among the tech stocks punished more severely by investors. However, Dell rose nearly 3 percent in after-hours trading. Still, today's sell-off is nothing like September 2008, which hammered the tech sector.

S&P's United States credit rating downgrade was catalyst for the day's frenzied trading. "The downgrade reflects our opinion that the fiscal consolidation plan that Congress and the Administration recently agreed to falls short of what, in our view, would be necessary to stabilize the government's medium-term debt dynamics", S&P says in the Friday statement. "More broadly, the downgrade reflects our view that the effectiveness, stability, and predictability of American policymaking and political institutions have weakened at a time of ongoing fiscal and economic challenges to a degree more than we envisioned when we assigned a negative outlook to the rating on April 18, 2011".

The sell-off started in international markets before the opening bell here today. The Dow immediately fell 250 points, recovered, then dropped by more than 370 points before pulling up again and then plummeting once more.