While Apple's iPad currently enjoys a healthy advantage over its competitors presently, at least one analyst expects the bestselling tablet to enjoy its advantage for the next decade if not longer. Needham & Co. analyst Charlie Wolf expects competitors to eat into the iPad's lead, but the device will still have a 60 percent market share by 2020.

Wolf speculates that competition among competitors will mainly cannibalize market share among those competitors, rather than affect the iPad's market share in any demonstrable way. Such a prediction may not be far from the truth: while dozens -- if not hundreds -- of new tablets have popped up in recent months, none have been able to gain any traction against the iPad.

It should be noted that a report from Strategy Analytics last month had already placed the iPad's market share near 60 percent -- 61.3% to be exact -- down from 94.3% a year ago. At the same time, Android's market share exploded and rose from 2.9% to 30.1%, likely due to the fact that Android manufacturers only began releasing new tablets based on the OS within the past year.

Wolf is also likely looking at the install base as a whole. This would obviously benefit Apple and the iPad, as the company has had a head start in the market on competitors. The iPad's market share in that case is going to be much larger than the 61.3% found by Strategy Analytics, which is only looking at sales in the current quarter alone.

In order for Android -- the only really serious competitor in the market right now -- to do that, it's going to need another blockbuster tablet. Currently the only device to sell in numbers even remotely close to the iPad has been Samsung's Galaxy Tab device. But even there, the iPad is outselling the device by a wide margin.

As well as maintaining its lead in market share, Wolf also sees the price of iPads dropping considerably. The average selling price of the device was $630 in 2010: Wolf sees this falling to $377 in 2020. All the while, iPad shipments would have increased five-fold, hitting some 140 units by the end of the decade. 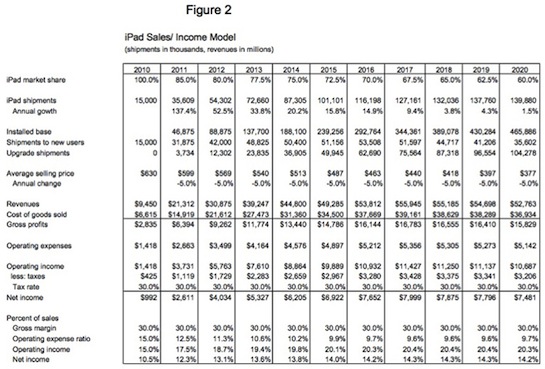 23 Responses to iPad's dominance will last through 2020, says analyst