Mark this day -- Aug. 10, 2011 -- on a calendar, for it may be remembered as a turning point for Apple, when it finally claimed and maintained largest market capitalization and the beginnings of a developer revolt broke iOS mobile apps dominance. What's that axiom about Rome declining at the height of power and rotting from corruption within?

Yesterday, several times, Apple's market valuation topped Exxon, making it the world's biggest company. But Exxon closed a few billion bucks ahead of Apple. As I write early this afternoon, Apple has surged ahead of Exxon and is set to close the day of trading with higher market cap.

So what is the world's most valuable company -- with $75 billion cash horde -- doing with all that power? Bullying competitors with patent and intellectual lawsuits -- HTC and Samsung, notably -- and development partners with restrictive -- and I would say anticompetitive -- policies. The restrictions have led to surprising response, all on the same day. Amazon, Financial Times and Vudu released Web apps that sidestep Apple App Store policies and can be consumed in a browser. The significance cannot be understated.

Apple's success on mobile devices is largely tied to the iOS App Store, where there are more than 450,000 apps -- 100,000 of them for iPad. Many people are convinced that Apple's platform is a sure winner because of the large number of apps available. Analysts, bloggers, investors and journalists sing this apps-rule-the-day tune. But there is another choice, and one that would allow developers to create apps for many different mobile platforms and devices. For developers with limited development resources, HTML5 is a compelling alternative.

There absolutely is interest. Late last month, IDC surveyed more than 2,000 developers about their mobile priorities. Sixty-six percent are "very interested" in HTML5 mobile web development, which has "found its middle-of-the-pack status", according to the report. "While the focus continues to be iOS and Android application development, mobile websites are becoming a complementary requirement for most developers and businesses today".

For some developers, HTML5 mobile web app development is the priority -- and Apple largely is the reason. In February, Apple changed its apps policy for e-bookstores and other content providers barring their using external links to purchase content and demanding in-app purchases. For example, Amazon's iOS app would let users read books but took them to the retailer's website for purchases. The change meant that to sell books on iOS devices, Amazon, Barnes & Noble and other booksellers would have to pay Apple a 30-percent commission. In July, e-booksellers updated their apps, removing the option to buy via external links. 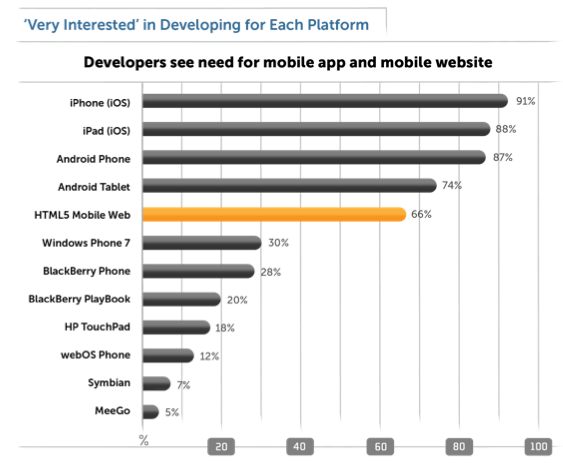 The move strikes me as being sorely anticompetitive, since Apple's iBookstore competes with these same booksellers. According to major analyst firms, including Amazon and IDC, iPad has overwhelming market share lead in the market for media tablets. On Monday, Needham & Co. analyst Charlie Wolf forecast iPad as being market leader through start of the next decade -- with 60 percent market share in 2020.

There are two areas that could, and frankly should, be investigated by antitrust authorities. Firstly, the control Apple is trying to take away from publishers so that it can charge them more money, from a monopoly position. Secondly, Apple's apparent attempts to extend iPad into the nascent e-reader market. The requirement is bad business for most publishers because they have to charge existing customers more so that Apple gets its cut, or stop selling books linked to their iOS apps.

Today's response, from Amazon, Financial Times and Vudu is nothing short of innovation to sidestep intimidation. The questions now: Who's next? How many? How soon? Wouldn't it be funny if Apple bullying led to a larger developer revolt and escape to HTML5 mobile web apps? Google would be one of the big beneficiaries -- for Android on phones and tablets -- and its own web services.

In April 2010 post "Clash of the titans: Apple, Google battle for the mobile Web" I laid out opposing Apple and Google worldviews -- one focusing on mobile resident apps the other on apps/services consumed in the browser: "Where these two worldviews clash is the mobile device, such as the smartphone. HTML5 promises rich Internet applications consumable in a browser, which favors Google's worldview and search-and-advertising business model. Mobile applications favor Apple, which tightly controls the hardware-software platform -- and applications development by the APIs it chooses to expose and the terms dictated to developers".

Apple's tight controls have been good for keeping the iOS platform stable and the end user experience consistent. But store policies have put some developers in a difficult position, whether the process for approving (more aptly, rejecting) apps or those telling companies like Amazon or Financial Times how they should run their businesses. Intimidation is strangely driving innovation -- and some developers away from the App Store.

For Financial Times it's an aggressive campaign: "We're encouraging our readers to switch immediately to the new FT web app, as many new features and sections will be added over the coming weeks. Make sure you don't miss out on these updates". That's a polite way of saying to hell with the iOS App Store. FT even offers instructions for adding the HTML5 app to the iPad and iPhone home screen.

So does Vudu: "Got an iPad? If so, we've got great news for you! Starting today, you can rent, purchase and watch movies from Vudu directly on your tablet. We've optimized our website for viewing on your iPad, so you can navigate our collection of over 20,000 movies with a simple flick of your finger. There's not even a need to install an App. Instead, just add an icon to your iPad desktop by clicking the 'Add to Home Screen' button". No need to install an app should chill Apple execs to their bones.

Then there is Amazon, and I must thank Apple. I'm using the Samsung Series 5 Chromebook now full time and surprisingly loving the experience. Thanks to the Kindle app Amazon developed to get around restrictive App Store policies, I can now read Kindle ebooks on my Chromebook. I look forward to even more apps, as more developers create HTML5 mobile apps either to compliment those for iOS (and even Android) or even to replace them.