A history of Motorola: From a warehouse in Chicago to Google's arms

Across its 83 years in business, Motorola has spent all of it focusing on mobile technologies, and nearly 65 years in the cell phone business. You could argue that the company was a pioneer in the sector, possibly the reason why it became so attractive to Google.

We've put together this (somewhat) comprehensive list of Motorola's activities in the sector to give you an idea of just how important of a role the company has played in mobile technology.

1928 - Motorola is founded in Chicago, Illinois by Joseph and Paul Galvin in September of that year as Galvin Manufacturing Corporation.

1930 - The name "Motorola" is created as the brand for the first commercially successful car radio. It is the combination of the word "motor" for car, and "ola," which the Galvins believed to infer sound. The brand essentially means "sound in motion." 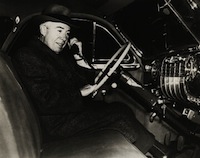 1946 - The beginnings of the cell phone. Motorola's equipment is used to make the first in-car telephone calls over Illinois Bell's radiotelephone service in Chicago in January.

1956 - The company debuts its first pager, calling it a "new standard in personal communication."

1973 - The modern cell phone starts development with the debut of the DynaTAC. 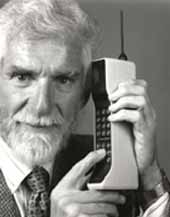 1983 - Ten years after the company shows its first prototype cellular phone system, the FCC approves a commercial version of DynaTAC in September. The phone would not be available at retail until the following year. Arguably the first cell phone accessory also makes its debut: the "VSP" (Vehicular Speaker Phone) allows for handsfree operation.

1986 - Morotola's Bravo pager is released, which would go on to become the world's best selling pager.

1991 - The company plays a crucial role in the development of GSM, debuting a system and phones in Germany. The technology now is a global standard used in nine out of 10 phones in operation worldwide today. 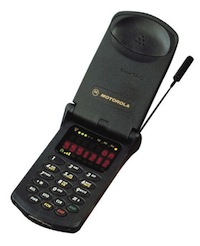 1996 - The StarTAC is released. Arguably no other phone gains the cult following this device does: it is used by a hardcore group of aficionados for more than a decade. Over 60 million were sold, making it one of the earliest blockbuster devices.

1999 - Motorola debuts its first tri-band GSM phone -- the Timeport -- allowing users for the first time to use the same phone when traveling worldwide.

2000 - The company teams up with Cisco to deliver the first GPRS network to BT in the United Kingdom. The first GPRS phone is released, the Timeport P7389i.

2003 - The company makes its first foray into the smartphone market with the A760, which used the Linux operating system with Java technology.

2004 - The RAZR debuts, arguably setting off a trend to go thinner and smaller -- and like the StarTAC, gains a cult following that uses the phones long after the company stops selling them. It held the honor of the bestselling cellular phone in history until it is eclipsed by the iPhone in 2008.

2009 - Motorola takes a chance on Google's new Android smartphone operating system. It ends up paying off and several of its devices become some of the bestselling models on the platform.

2011 - On January 4, the company announces it will spin off its Mobile Devices division into a separate company called Motorola Mobility. Motorola Solutions would handle all of the company's non-cellular related activities.

August 15, 2011 - Motorola Mobility is acquired by Google in a $12.5 billion transaction. Google calls the move "defensive," aimed at staving off an increasing tide of lawsuits aimed at the Android operating system.

13 Responses to A history of Motorola: From a warehouse in Chicago to Google's arms