Calm down, Android malware makes up a tiny .00024% of the threat landscape 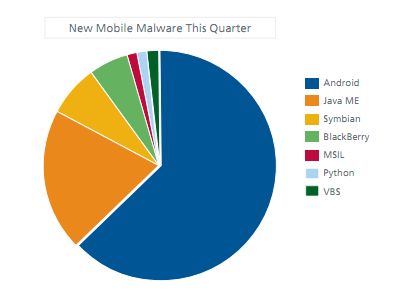 Security researchers and software companies have been warning of the shift to mobile-borne malware for years, and Android seems to be the primary platform of concern.

Over the last two years, we've witnessed the arrival of Android anti-malware applications from Symantec, McAfee, AVG, Softwin (BitDefender), ESET, F-Secure, and Lookout Security, and each time a new product is released, a new warning of the potential destruction a mobile virus, trojan, or botnet has is released.

This week, McAfee released its second quarter 2011 Threats Report which said Android became the most common target for mobile malware, with a 76% increase in the number of threats since the first quarter of the year. The security provider cited malware such as Android/Jmsonez.A, Android/Smsmecap.A, and the Android/DroidKungFu, and Android/DrdDreamLite families as new common threats.

As you'd expect, the various platform-partisan blogs turned this into the old "Mac vs. PC" fight, where the iPhone is presented as being impervious to infection, while Android is plagued with viruses.

So even though the mobile platform jumped 76% in number of threats, Android still represents only .00024% of the total threat landscape (63 million definitions,) and it has a very, very long way to go before it reaches a point where it could be considered an analog to the PC virus landscape.