How does an earthquake affect Internet traffic? 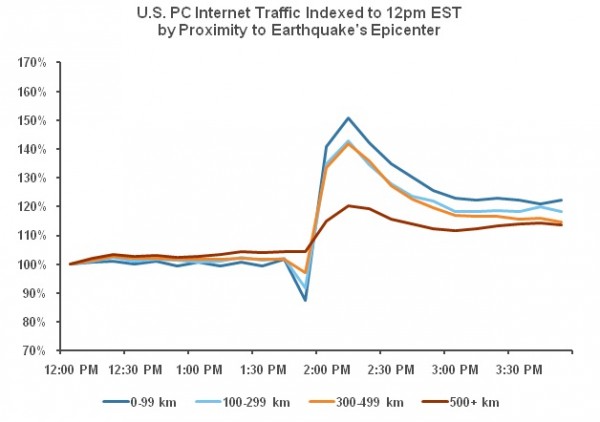 What's the first thing you think about when the ground shakes. "Run!" Right? Earthquake means get out and away from falling buildings. The folks over at comScore react differently, and in doing so have compiled some fascinating data from this week's 5.8-magnitude quake starting in the Mid-Atlantic region. Dan Piech writes:

"Maybe we’re complete data geeks, but as we evacuated comScore’s headquarters in Reston, Virginia, a mere 72 miles from the epicenter of the largest earthquake to hit the region in 67 years, the first thing on our minds was wanting to understand the quake’s quantifiable impact on Internet usage...

Upon re-entering the office following our evacuation, we immediately kicked off a number of scripts to begin aggregating the Internet usage data into usable insights. As we brainstormed, we came up with our newest comScore creation – the “Internet Seismometer” – which is an animated look at U.S. Internet usage by minute between the hours of 1:40 pm and 3 pm [August 23] for computer vs. mobile-based traffic."

The charts are fairly self-explanatory and not surprising in that Internet and mobile traffic spiked highest close to the epicenter. But this finding says much about the state of modern communications: "The Internet facilitates lightning-fast mass communication. Tweets from DC reached New York before the tremors did", something we first reported here at Betanews.

Piech continues: "Within less than 20 minutes, Internet traffic had spiked on the West coast to its highest levels. Most people who were using the web because of this event were doing so within twenty minutes. That’s the time it took civilization to get an urgent message to the next town a mere century ago". 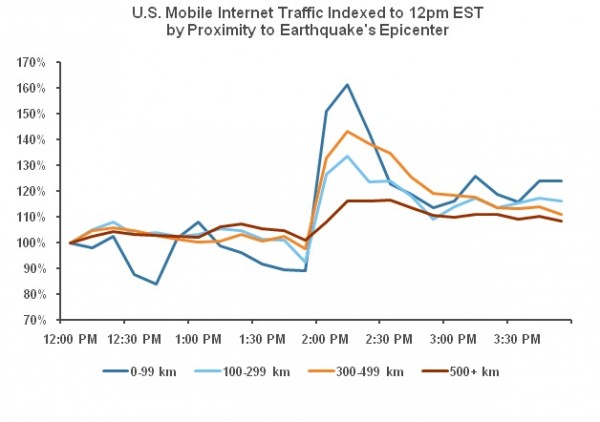