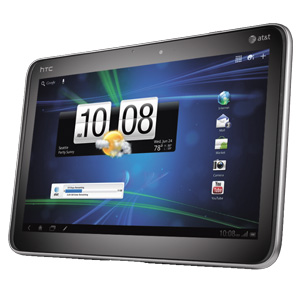 AT&T on Wednesday announced it will start selling HTC's Jetstream tablet on September 4th. The 10.1" Android Honeycomb tablet was known internally and in the Android rumor community as "Puccini."

HTC Jetstream has the honor of being AT&T's first 4G (LTE/HSPA+) tablet, and it is priced accordingly: a staggering $699.99 with a new two-year contract.

Aside from the 4G connectivity, the HTC Jetstream has a third-generation 1.5GHz dual-core Snapdragon processor, a forward-facing 1.3 megapixel camera, and a dual-LED flash 8 megapixel rear-facing camera. It runs Android 3.1 (Honeycomb) with the HTC Sense UI layer for tablets. It measures 7” x 9.87” x .51” and weighs 25 ounces, making it thicker and heavier than the Samsung Galaxy Tab 10.1", which measures in at .34" and weighs approximately 21 ounces.

Like HTC's other tablet, the 7" Flyer also released as the View 4G on Sprint, Jetstream supports the HTC Scribe digital pen accessory, and for a limited time will come with the peripheral at no extra cost.

Here are the HTC Jetstream specs all lined up: