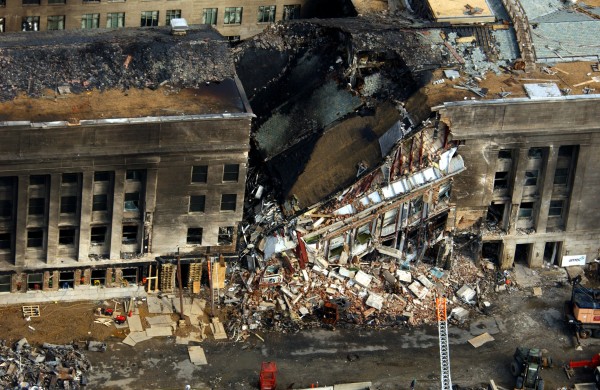 Ten years ago this morning, my wife remarked about the perfect fall day. Clear skies, low humidity and freshness in the air. Washington, DC hadn't seen such a refreshing day in months. The sweltering heat and humidity gave way to autumn's charms.

Around 9:20 a.m. ET, I checked the headlines at Washington Post. I had been online for hours, but not looking at local news. I was writing a news story for CNET. Across the top of the page was a one liner about an airplane striking the World Trade Center. We naturally assumed a small plane had struck one of the towers. While I looked for more details online, Anne checked CNN and gasped in the living room. I walked out to see video of both towers aflame. This was no small plane incident.

Events unfolded in rapid succession. Within minutes, the Pentagon was in flames; separately, the President talked about terrorist attacks. By the time we learned about the Pentagon, news reports clearly indicated that airliners had struck both towers. We figured this had to be the case in Virginia at the Pentagon. About 25 minutes after we first learned about the devastation at the Twin Towers, a plane crashed in Pennsylvania -- fourth highjack of the morning.

I flipped from channel to channel, riveted to the news coverage, but found MSNBC to be most useful. We watched in awe and confusion when the first tower collapsed. “Oh my, God! It’s gone,” my wife gasped; she's a New Jersey native, and The World Trade Center had more personal meaning for her. Neither of us could believe the tower had collapsed. My stricken wife went out for a walk and so didn’t see the second tower fall.

About a year earlier, a good friend of ours relocated from Takoma Park, Md. to northern New Jersey; he had taken a job with the Federal Communications Commission in  New York, where he worked at Seven World Trade Center. We called his wife and learned that he had left the building, which collapsed later that day, and started walking out of New York.

I struggled to get work stuff done for about 10 days following the terrorist attacks. I wasn’t depressed or even frightened. I personally felt that death and devastation -- like the extension of a humankind psyche had been wounded. But something else: We knew people personally impacted both in New York and Northern Virginia.

We really all are connected, in more obvious ways than we realize. There’s a concept called “six degrees of separation”, which Hungarian writer Frigyes Karinthy proposed in the 1929 short story “Chains.” The concept proposes that no two people are separated by more than five intermediaries, which works out to six degrees of separation. Long ago, I realized there is the "9-11 degrees of separation". You don't have to go too far from your circle of family or friends to find someone impacted by the terrorist attacks 10 years ago today.

Photo Credit: US Department of Defense