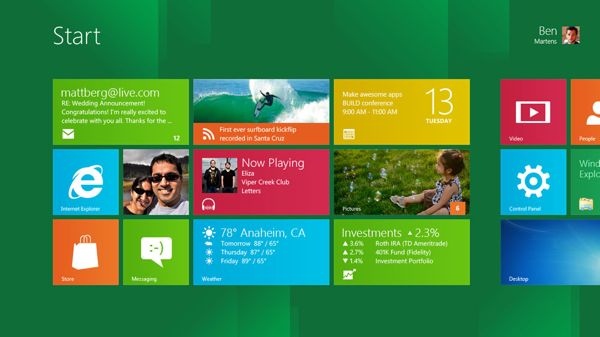 Steven Sinofsky, Microsoft's president of the Windows & Windows Live division, walked on the stage like a rock star this morning. "I'd like to invite everyone to Windows 8" Sinofsky says. He said that later this week, consumer usage of Windows 7 would exceed XP. Microsoft has sold nearly 450 million Windows 7 licenses. More than 500 million use Windows Live services.

"We're going to re-imagine Windows", from the chipset (ARM support) to user experience (Metro UI), Sinofsky says. Windows 8 is at the developer preview stage, he notes.

Julie Larsen-Green is on stage showing off Windows 8 Metro UI tiles. The fluidity and freshness of the presentation is breathtaking. Sinofsky steps in and describes the Start screen of tiles as a "unification" of programs, app launchers and widgets. It's all touch activated.

Internet Explorer for Metro Style ships with Windows 8, Larsen-Green says. Sinofksy pipes in and observes that it's completely Chrome-less, referring to Google's browser. "There's nothing better than a Chrome-free browsing experience", he says.

I'm immediately reminded of Microsoft's attempts to bring live content to the desktop during the Window 98 era. The strategy flopped for many reasons, limited bandwidth being one of them. That vision is fulfilled in Windows 8's Metro UI. The Internet is as much a part of UI as local file storage. For example, search works for file system and Internet. "It's webs and apps working together...a web of apps on your machine", Sinofsky says.

Sinofsky is holding up an ARM-based tablet. "You are going to get so addicted to using this product", Sinofsky proclaims. He describes the UI as "fast and fluid", and I would agree.

Now comes the developer nuts-and-bolts stuff. Windows 8 features the WinRT API, which is new and Sinofsky insists isn't something added on to the operating system. It is Windows. The new API will let developers write native code. I've got a slide showing the new Windows 8 architecture that I'll add to this post after the keynote.

Antoine Leblond is on stage building an app. I'm not a developer so will highlight benefits from his demo. Without writing a line of networking code or calling the Facebook UI, Leblond creates app PhotoDoodle and connects to Facebook photo-sharing in Windows 8's built-in Socialite app.

All this is being done in real time, using HTML5 and calling Windows 8 native code. This is what a platform is for, exposing capabilities that developers tap into -- reduce the amount of code they write. Leblond used 58 lines of code. This is one of the most impressive Microsoft developer demos I've seen in about 10 years (I'm ignoring the great stuff for Longhorn during PDC 2003 that never came to be).

OMG. The version of Visual Studio LeBlond is using has a post to the Windows Store option. Developers will be able to package, upload and choose licensing rights for their apps. There will be an applications certification process, Leblond explains. That process is designed in part to keep customers "safe". Developers will be able to view their apps certification process, and see how close it is to appearing in the store. Microsoft will provide developers with compliance tools so they can check their APIs and code beforehand. That reduces likelihood an app would be rejected for some technical reason.

The Windows Store will list Win32 and Metro-style apps. Microsoft will not impose its own licensing requirements but let developers with existing apps -- and maybe offering for download somewhere else -- to use their own licensing model. "We're giving these Win32 apps a free listing service", Leblond says.

Sinofsky is back talking about hardware. Developers can expect "full platform support with these Metro-style applications". Write once and runs on X86 or ARM, or different form factors.

Windows 8 supports up to 256TB drives. "It's like science fiction or something", Angiulo says. Can you say video storage?

Microsoft is carrying hardware-accelerated graphics from IE9 to Windows 8. Developers write the code and Windows provides the hardware acceleration to the apps.

Windows 8 supports various motion sensors -- like gyroscope and accelerometer -- accessed from a single API written with three lines of code. These capabilities are essential for tablets.

Angiulo and Sinfosky are showing off some pretty damn smoking Ultrabooks that aren't yet released. These are Windows 7 systems that I'd love to run v8 developer build on right now.

Sinofsky just announced what was rumored earlier -- "the Samsung Windows Developer Preview PC". The portable has Intel i5 processor, 64GB SSD, 4GB of RAM and get this one year free AT&T 3G with 2GB data per month.

Developers are managing to stay in their seats, rather than rush out for their Windows 8 slate. Sinofsky is back, showing off the new task manager. "It's been about 20 years...so let's give it a shot", he says referring to the makeover.

We're most of the way through the keynote, and Sinofsky is only now making the first real reference -- and that's in passing -- to the Ribbon. Is that because Microsoft wants developers focused on Metro apps or the negative reaction to the Office Ribbon coming to Windows 8?

Windows 8 is designed for "everyone", Sinofsky says. He shows the digital keyboard with different installed language packs. Language can be changed in a tap or click.

Finally, Microsoft does synchronization right. Personal settings roam with you from Windows Live. Chris Jones is demoing Live services, which are "rewritten in Metro-style" -- "all written in HTML and JavaScript". He emphasizes: "It's all written to be immersive". These Metro-style Live services make Google services look like something from the 1940s and Apple stuff from the 1970s. Apple hasn't even released iCloud yet, and it's antiquated.

Sinofsky interrupts and says that all this is powered by WinRT. Jones is demoing photos, rendered spectacularly, from Windows Live SkyDrive. Whoa, he's pulling photos from a Windows PC in Redmond, Wash., across firewall there and firewall here all connected and authenticated using a Windows Live ID. Think about the implications of connecting simply around the ID without complicated third-party VPN software. "You can integrate SkyDrive storage into your apps", Sinofsky tells developers.

Jones is showing the SkyDrive experience on a Windows Phone 7.5 HTC handset. It's impressive. For years I've said that sync is the killer app for the connected world. Finally Microsoft is going to deliver. Tough luck Apple and Google. Well, someday, "We're not releasing these applications today", Jones says. Since Windows 8 isn't available, of course not.

Uh-oh, Sinofsky says all the apps shown today are just "samples". Samples? They were created by college interns. Sinofsky introduces 20 of them and now there's a video about their "summer of apps". Looking at the video, it's clear that the samples are different from some of the stuff shown here.

Next milestone is Windows 8 beta, then release candidate, gold code and general availability. "We're going to be driven by quality not the date", Sinofsky says. Microsoft will update the developer preview using Windows Update -- to test that feature.

Microsoft will post the Windows 8 Developer Preview online tonight at 11 p.m. ET. "No activation" is required, Sinofsky says. Download and run at your own risk. Get it here.

28 Responses to Live from Microsoft BUILD