Qwikster is one Netflix too many 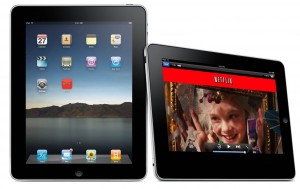 I've got to ask: Has Reed Hastings exhausted his magic? Because suddenly Netflix's CEO can't seem to do anything right. For the fourth time since mid July, investors brutally punished the stock; meanwhile customers rage about major changes to how they either rent or stream movies. Netflix shares closed down 7.34 percent today, at $143.75. The same week in July that Netflix announced a 60 percent price increase for most customers, shares traded for $298.73.

Customers are tumbling, too. On Thursday, Netflix lowered subscriber projections by 1 million for the quarter. Wall Street received the news badly. Shares closed 8.31 percent on Friday, recovering from an early-trading decline of nearly 19 percent. Customer reaction is largely negative to plans announced overnight to split up Netflix into separate streaming and DVD companies -- the latter named Qwikster. For many customers, Qwikster is one Netflix too many.

"Qwikster.com and Netflix.com websites will not be integrated", Hastings revealed in a blog post and email sent to subscribers. "So if you subscribe to both services, and if you need to change your credit card or email address, you would need to do it in two places. Similarly, if you rate or review a movie on Qwikster, it doesn’t show up on Netflix, and vice-versa...Members who subscribe to both services will have two entries on their credit card statements, one for Qwikster and one for Netflix".

"This is not anymore the Netflix experience that I loved and enjoyed", Betanews commenter hminoui writes. "They already removed the saved list from Instance Queue. If there are no integration between the two queues, I see not reason to stay with Netflix. I accepted the price hike as cost of doing business, but the separation of the two is nothing but disrespect to customers".

"Are you kidding me?" BN reader Luis asks. "I stayed after the price hike, but now this -- now it's just too much! The ratings and reviews will not carry over? Credit card changes in two places now instead of one? Just too much".

YetAnotherITGuy: "That is insane -- split it into TWO companies and charge seperately? I have been a Netflix subscriber for 3 years and hung on after the price increase for DVD/Blueray/Streaming but I am definitely going to bail if this goes through. Amazon Video streaming through my Roku will do just fine, thank you".

In the communique announcing the split, Hastsings began: "I messed up" yet also stood his ground on the price changes: "I should have personally given a full justification to our members of why we are separating DVD and streaming, and charging for both. It wouldn’t have changed the price increase, but it would have been the right thing to do".

Commenter CJ R rightly observes: "Splitting into two business segments does not provide an explanation for the price increase. There is no reason why the two segments can bill at the old price and internally divide the fees. This happens all the time in the business world so I don't understand the apologetic letter to customers".

But Betanews reader Noklu sees circumstances differently than most commenters (so far): "This makes a tremendous amount of sense on Netflix's part. They were early to try the streaming concept on a large scale. They underestimated how big it would be. I'm sure the two services have very different costs. Personally I am not interested in movies on DVD's, they will most likely go the way of the VHS tape".

Larry Biddle agrees "it makes some sense for NetFlix. However, it's just more hassle for the customers - ie. the people paying the bills...Rather than go thru the hassle of paying two bills, I'll quit the both -- until they get streaming together. I'm not gonna pay them while they get their act together. Hello Redbox".

That brings us back to the question about Hastings losing his magic touch, or perhaps being out of touch. Even he admitted as much in the blog post/customer email: "In hindsight, I slid into arrogance based upon past success. We have done very well for a long time by steadily improving our service". Reed identified clear CEO communication as solution. But is it? The mid-July price increase announcement was clear, and Netflix customers balked, and investors have since stripped shares of value. 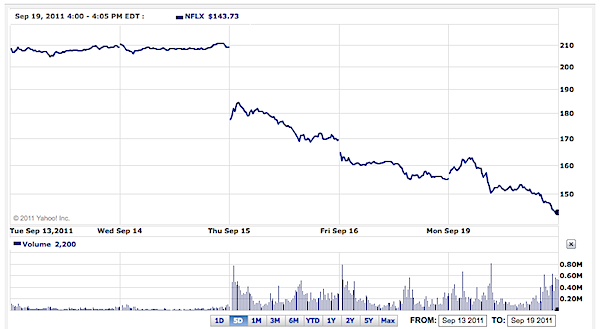 Based on customer and shareholder reaction, the price increase counts as screw-up #1. Then came the loss of the Starz streaming contract 18 days ago. These two screw-ups precipitated the third -- loss of subscribers after years of steady growth. The fourth: Decision to split up Netflix into two companies separately billing customers for the same services they receive today with social-rating services removed from the DVD operation.

Has Netflix's long-running success put Hastings out of touch with customers and what it takes to keep them, particularly when they have choices like Amazon Instant Video for streaming and Redbox for DVDs? The stock collapse is something else. Shares traded for nearly $211 on Thursday, before Netflix's subscriber-loss announcement -- $143.41 in after-hours trading.

Shareholders and the Board of Directors need to oust this idiot whom defines the word 'Fool'. He is intentionally killing the business. Yes, both streaming and DVD by Mail. Every moment of delay is more lost and angry customers. Drop him now. Stop the insanity. Qwikster needs to die. Netflix is DVD by mail and streaming. Price increases are understandable if the content is there. That to appears to be questionable as the Starz deal was the only decent content...Netflix you are on borrowed time.

Is he (or she) right? Please respond in comments and answer our new poll.

35 Responses to Qwikster is one Netflix too many