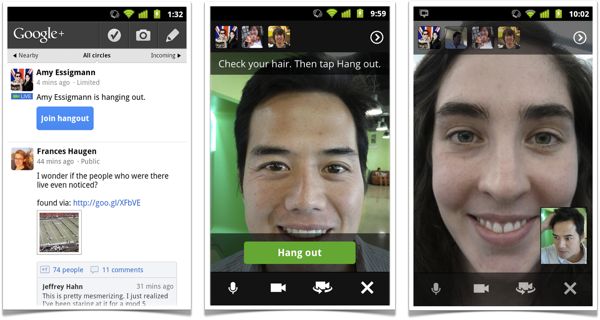 One of the most forward-thinking features of Google's three-month old social network Google+ is its ability to set up multi-person live video chatrooms called "hangouts," here, users with webcams can convene over a youtube video, set up impromptu performances or instructional sessions, or just hang out.

The Google+ mobile app didn't support hangouts, but now users with Android 2.3 and a device with a forward-facing camera can join hangouts on their mobile phone. This requires a new version of the Google+ app, which is available in the Android Market today. Google says this functionality will be available on iOS soon.

Hangouts were limited to small groups of only 10 users, but with the new feature called "Hangouts On Air," users can start a normal hangout, accept up to 10 participants, and then broadcast the discussion or performance for everyone to see. It could be an ideal solution for public panel discussions or even more creative applications.

It's only been a few days since Google launched the first APIs for Google+, and today, the team released the developer preview of a basic set of Hangouts APIs.

"The integration model is simple -- you build a web app, register it with us, and specify who on your team can load it into their Hangout. Your app behaves like a normal web app, plus it can take part in the real-time conversation with new APIs like synchronization. Now you can create a “shared state” among all instances of your app so that all of your users can be instantly notified of changes made by anyone else. (This is how the YouTube player keeps videos in sync.) And we’ve added our first few multimedia APIs so you can, for example, mute the audio and video feeds of Hangout participants," said Richard Dunn, Technical lead of the Google+ platform for Hangouts.