Google on Tuesday unveiled a large-scale social sharing project it's calling Google+. Not to be confused with the +1 button it introduced in March, Google+ is a five-pronged, post-Facebook approach to social networking and collaboration. 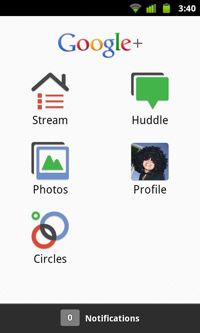 The Five Prongs of Google+

+Circles- Rather than just pile everyone you've ever met into a list of Friends or Followers, Google+ lets users arrange friend lists according to the acquaintanceship they have with the person. Just like you've been able to do for the last 15 years with various instant messaging clients, you can arrange your friends into appropriate circles.

+Sparks- Similar to the way you might "like" a brand or news story or celebrity on Facebook, you add "Spark" topics on Google+. The "like" button, however, doesn't really do anything beyond putting you in the crosshairs of advertisers. Adding a Spark ties you into all the conversations going on about the topics you like, and you get a feed of content that people are sharing related to them.

+Hangouts- This multi-user video chat system is based on the premise that people want to hang out and not be awkward, so rather than force someone to set up a chatroom by topic or by a list of users, Hangouts are video chatrooms that exist solely to casually hang out and meet people.

+Mobile- Google is taking the "cache or share everything" attitude of Microsoft's short-lived Kin service and adding always-on geotagging and instant cloud uploading and caching to content sent from your mobile device. It could be status updates, or it could be pictures and video, but the primary idea is that the phone is just the tool to getting stuff onto the social Web. 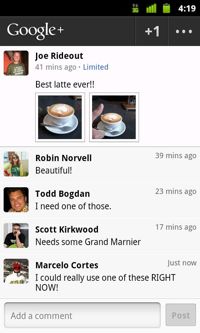 +Huddle- This is a realtime group messaging client based around small groups of fellow users. Google is billing it as an ideal solution for event coordination, where multiple people must communicate with each other at the same time without it being a public conversation.

The Google+ mobile app is available in the Android Market today, but since this is the first widespread "field trial" of the service, it is only available if you have an invitation.

24 Responses to Google+ is much more than a Facebook killer