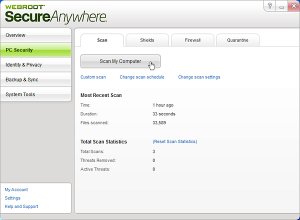 Webroot is describing its new SecureAnywhere 2012 range as being “the fastest and lightest virus and spyware protection you can buy”. And while this sounds like more security company hype, on first glance at least it looks like they may have a point.

The core antivirus engine is a compact and ultra-lightweight cloud-based affair, which makes smart choices about the files it checks to minimize scan times. Webroot say this means system scans will typically be under two minutes, something that we confirmed (they were closer to 30 seconds on our test PC). And the program is very careful about its use of RAM: we found it peaked at around 50MB when scanning, and when idle was closer to 5MB (private working set).

Yet despite this compact framework, there are still plenty of useful features to be found here.

Webroot SecureAnywhere AntiVirus 2012 ($39.95) provides real-time protection, on-demand and scheduled scanning, some browsing protection, a sandbox, the ability to prevent malware from changing your settings, and more.

Webroot SecureAnywhere Essentials 2012 ($59.95) takes that core package and adds a firewall, privacy tools, a phishing filter, and 2GB of online server space to use for file synchronization or basic backups.

And the high-end package, Webroot SecureAnywhere Complete 2012 ($79.95) further adds password management, extends your online backup space to 10GB, and perhaps most importantly, offers additional security packages for both iOS and Android devices. These will variously scan your apps for threats, block dangerous website and secure your online transactions, and if you’ve a 3G or 4G device can also try to locate a lost device, and even wipe it remotely.

The SecureAnywhere range is lacking in a few areas. In particular, there’s no spam filter or parental controls, which can leave the programs looking a little expensive.

Still, if you’re tired of your system being weighed down by bloated security suites then there’s plenty to like here. All the packages really are fast and lightweight, and for the most part you’ll be able to use your system without knowing they’re running.

What’s more, both SecureAnywhere Essentials 2012 and SecureAnywhere Complete 2012 actually are licensed for installation on up to 3 PCs, so if you’ll use all those, and perhaps the mobile security features, then the price begins to look much more reasonable.

Either way, SecureAnywhere represents a major and very interesting revamp of the Webroot range, and is definitely worth a closer look. Trial versions of all three SecureAnywhere packages are available now.