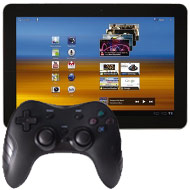 To keep up with the shifting tide of video game distribution and the increasing popularity of mobile tablets and smartphones as video game systems, brick-and-mortar video game retailer GameStop was said to be working on an "Android-based gaming platform."

Now, the retailer has begun its push by offering the 7" Acer Iconia Tab A100, the Samsung Galaxy Tab 10.1, and the Asus Eee Pad Transformer in bundles that come with a special Bluetooth game controller, the Kongregate Arcade app, digital subscription to GameStop's Game Informer magazine, and a handful of exclusive games.

Kongregate, which GameStop acquired late last year, is a social gaming portal with thousands of free games built in Flash or the Unity 3D game engine. It works on a system of credits which are used to buy in-game items or to "tip" game developers directly.

Because the Android ecosystem is ripe and ready for a game console, the question becomes: with whom is GameStop competing? 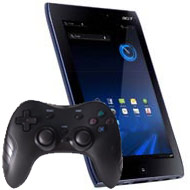 Two months ago, GameStop made it abundantly clear that it was going to be competing with streaming game service OnLive, when employees were instructed to discard vouchers for free OnLive versions of Deus Ex: Human Revolution that were packed into PC versions of the game. OnLive lets subscribers play full PC games without installing anything other than the OnLive client, this allows them to play games on their TV, Mac, PC, and iPad or Android tablets. Naturally, this makes the service a competitor to GameStop as it's another "over the top" gaming service for Android.

What is not presently clear is GameStop's position on native Android game titles, and benefits of the relationships it has forged with game publishers. The first "GameStop Tablets" come with a couple of exclusive games not yet available in the Android Market, such as Dead Space, which has only been available directly from EA, and Sonic CD, which has not yet been officially released. 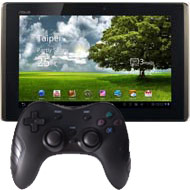 The retailer could conceivably establish its tablet platform as a priority venue for new releases, thereby adding value to its services.