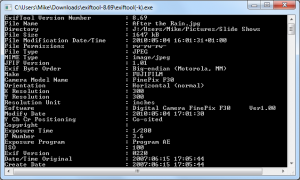 Many file types support metadata, special tags that provide more information about their contents. A digital photo JPEG may reference the model of camera that took it, for instance; an MP3 might detail the album where it was originally released; PDF documents will often include tags mentioning their title and author.

In some cases you’ll be able to view at least part of this metadata from Explorer (right-click, select Properties > Details). For full control, though, you’ll typically have to go back to an application that specializes in that particular file type: an image editor for JPEGs, an ID3 tag manager for MP3s, and so on. Unless, that is, you have a copy of ExifTool.

This command-line utility can view, edit and write metadata for more than 130 file formats. So that means it doesn’t just handle the basics, like JPEG, MP3 and PDF. There’s also support for many digital camera RAW formats. It’s able to handle old or obscure formats, like Paint Shop Pro’s PSP. And there’s support for many file types that you may not think of as having metadata at all: RAR, RTF, SWF, WEBM and more.

At a minimum, ExifTool can display, edit or write metadata to your chosen file types (which can include a complete directory tree, for speedy batch processing). But it can also make practical use of this information. The program is able to process files based on their metadata, for example renaming or organizing them into directories according to some specified metadata tag. ExifTool can extract thumbnail images from RAW files. And there are plenty of other unusual applications possible, such as geotagging a set of images based on GPS track log files.

Of course, command line tools with this much functionality aren’t exactly renowned for their ease of use. If you’d like to organize a set of files by their creation date, for instance, then you’ll first need to spend some time mastering the various switches and syntaxes before you come up with something like this:

Still, the program can be immediately useful without any of that complexity; just drag and drop a file onto the ExifTool executable to view its metadata.

There’s also plenty of documentation, with lots of examples to speed up your learning, and a busy Help forum where ExifTool author Phil Harvey often assists.

But if you’re still put off by this amount of command line work, there are several free graphical front ends for ExifTool which provide easier access to at least some of its capabilities. Check the author’s site for the full list.