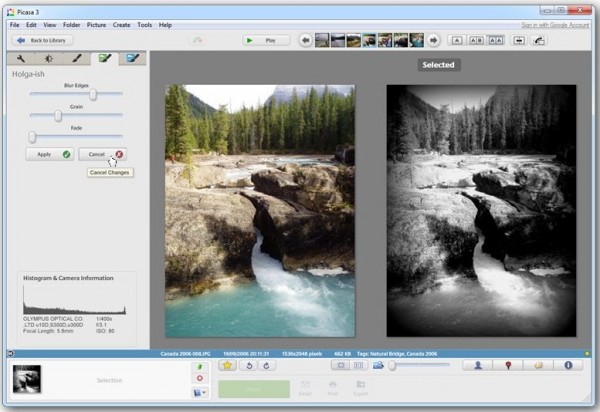 Google has updated its popular cross-platform image-viewing, editing and sharing tool, Picasa to version 3.9. Despite the minor version number, there are a significant number of new features and improvements.

Google is keen to showcase Picasa’s new Google+ sharing capabilities, but of more interest to most will be the smorgasbord selection of new photo editing effects and the ability to compare “before” and “after” images side-by-side.

There’s also a handy new feature for migrating Picasa databases to different hard drives, plus a selection of other improvements, including when restoring virtual albums after a migration or reinstall.

With so many effects and editing options to choose from, Picasa 3.9 also introduces a new side-by-side feature that allows two photos, including the same photo, to be displayed next to each other. By choosing the same photo, users can experiment with editing tools and effects and see how they compare to the original.

Picasa also ties itself more closely into Google+. You can now upload your photos to your Google+ stream -- at original size if required -- and share them with specific circles. You can also name-tag people people from your Google+ circles and notify them via G+, all of which can be seen as part of Google’s attempt to give its stuttering social network an extra boost.

Of value to people who need to reinstall or migrate to another computer is the ability to move your Google database to a new drive, allowing you to store it securely on a separate partition allowing it to survive a reinstall. To do this, select Tools > Experimental > Choose database location.

There are also improvements to the Face Movie maker tool. updated RAW support for pictures from newer cameras and added support for WebP files and OAuth authentication. Sync now defaults to uploading shared albums privately, and there’s improved restoration of virtual albums when uninstalling and reinstalling the software, or moving to a new computer. This is down to the fact album data along with other editing is stored in the picasa.ini file.

Picasa 3.9 is a freeware download for Windows, Mac and Linux. At time of writing, you’ll need to download and install it over the top of any existing Picasa installation, but updates should be rolled out to existing users shortly.