The most successful brands define their category/function, like Xerox for "print". According to research NPD released today, for many business decision makers "tablet" means "iPad".

"The iPad, just as it is in the consumer market, is synonymous for 'tablet' in the business market, leaving Apple poised to take advantage of the increased spending intentions of these SMBs", says Stephen Baker, NPD's vice president of industry analysis. Those spending intentions are on the rise, with 73 percent of businesses with fewer than 1,000 employees planning to buy tablets -- eh, iPads -- during the next 12 months. That's up from 68 percent in second quarter.

"Businesses of all sizes appear to be determined to capitalize on the tablet phenomenon", Baker says. "NPD’s research shows that iPad purchase preference is higher among larger firms than smaller ones, which is an important indicator that Apple is gaining traction far outside its typical consumer space".

One reasonable question to ask: What does this mean for SMB PC sales? "This by no means equates to the death of the PC market", Baker says. "The combination, however, of the length of time since the Windows 7 launch, the need to spend on higher cost infrastructure, and the increased spending on tablets has clearly put a crimp on PC spending intentions, especially among the largest firms".

Microsoft has sold over 500 million Windows 7 licenses, the majority to businesses, and many are completing or have completed major upgrade deployments from Windows XP. The tablet, eh iPad, surge comes at a time when more SMBs are free to spend on something else. "Only 23 percent of the largest firms (501-999 employees) anticipated spending additional sums" on PCs, Baker says. "The expected spend over the coming year was almost $75,000, which would equate to replacing around 10-15 percent of the company’s installed base"; "for the smallest company, their $3,400 would also fund an upgrade for about 10-15 percent of the firms PCs". 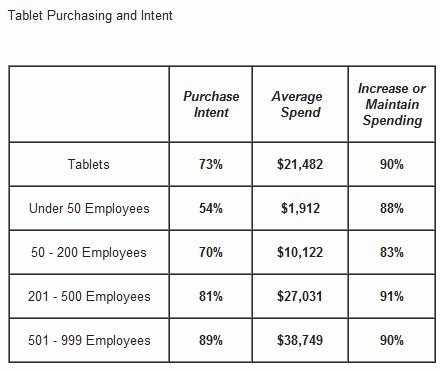 Looked at differently, businesses with fewer than 50 employees have budgeted for tablets about 56 percent of what they could spend on PCs. For those with 501-999 employees about 52 percent. There's no saying definitively these SMBs would spend on PCs what they allocate to tablets. But there is only so much money to go around.

Baker regards the numbers a little differently than I do, but he also has access to a full range of data not at my disposal:

While the market speculation spins about the decline in the PC market it remains apparent that someone forgot to tell the customers. Spending continues on PCs, and on tablets, and few companies, even the smallest ones, are significantly reallocating their spending away from the personal computing needs of their employees. As we head into 2012 the SMB market continues to provide an important source of volume and dollars to PC market.

I have two questions for you. When I say tablet, do you think iPad? If an IT manager, will you displace some PC spending on tablets this year? Please answer in comments.