It's not because of iPhone 4S 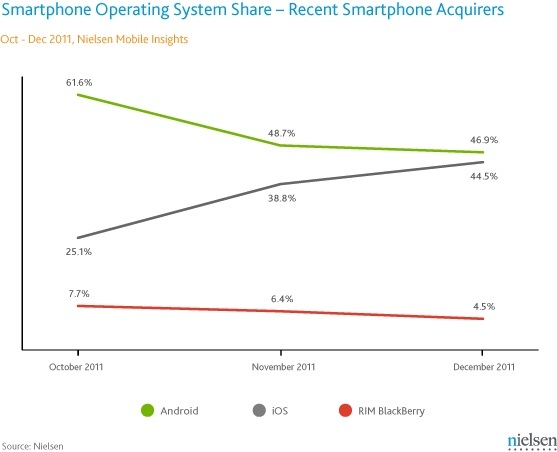 That's again my reaction to startling US mobile numbers that Nielsen released today. Like comScore, Nielsen shows dramatic -- and I mean absolutely stunning -- changes in Android and iPhone adoption since the 4S shipped. Android share, as measured in smartphone operating systems among new purchasers, plummeted from 61.6 percent in October to 46.9 percent in December. Meanwhile, iPhone rose from 25.1 percent share to 44.5 percent. Distribution -- not release of iPhone 4S -- is reason, or so I say.

Nielsen, naturally sees something else: "The high-profile launch of Apple’s iPhone 4S in the Fall had an enormous impact on the proportion of smartphone owners who chose an Apple iPhone" -- that would be for November and December. But that simplistic analysis overlooks mitigating factors. Among the most important -- 43 percent of new buyers chose older iPhones 4 or 3GS.

All these things dramatically broadened iPhone distribution in the United States. The new carriers opened up iPhone to subscribers who couldn't or wouldn't switch to get the handset. Lower pricing on older models broadened the number of people who wanted iPhone but couldn't or wouldn't pay $199 or more to get one. Lower pricing also lessened the appeal of cheap Androids these Americans might otherwise have purchased.

The proof is in earlier comScore and Nielsen data, even without benefit of separated sales -- for iPhone 3GS, 4 and 4S -- which would definitively answer who is buying what. According to comScore, the top three selling iPhones are 4S, 4 and 3GS in that order, which certainly says something. But Nielsen says more: "57 percent of new iPhone owners surveyed in December said they got an iPhone 4S". That means 43 percent bought one of the two older models; that's the sales power of lower pricing.

The historical data tells an interesting story. Despite the hype, iPhone share among all subscribers or new purchasers did not perceptually change following the release of iPhone 4 on AT&T and later on Verizon. It was a big upgrade from iPhone 3GS, with new enclosure, dramatically better display and higher-resolution camera. By comparison, the 4S was a modest upgrade.

For example, according to comScore, from August to November 2010, iPhone US subscriber share rose less than one point -- to 25 percent. This was during the post-iPhone 4 launch period. Over the next year, iPhone nudged up to about 27 percent average share, while Android soared, whether measured by install base or new purchasers.

The historical data contradicts earlier projections that both iPhone 4 launches would bring huge share gains. Meanwhile, 4S is, as previously mentioned, a modest upgrade. Different now: Distribution, particularly availability of lower-cost older models, to a new market of buyers. Unquestionably, Apple's handset is on a roll, at least here in the United States, but it's not because of iPhone 4S.

34 Responses to It's not because of iPhone 4S