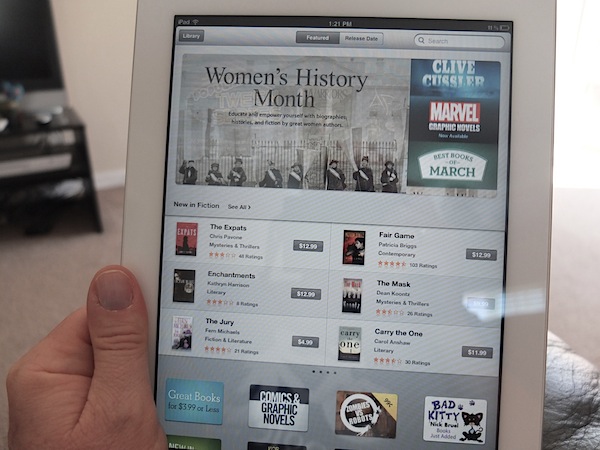 While Apple and book publishers may find themselves on the precipice of an antitrust lawsuit from the Justice Department, filings in a concurrent civil class-action lawsuit obtained by BetaNews indicate that Apple has already admitted to two of the most damaging allegations in the case that the federal government is likely to include.

According to reporting Thursday by the Wall Street Journal, at the heart of the case is the agreement struck with publishers which changed the way ebooks are sold to retailers. This in turn caused prices to increase dramatically, critics argue. Apple is also accused of further controlling the market through a clause in its own contract for iBooks that forbade publishers from permitting competitors to sell books at a cheaper price than the iBookstore.

Statements by Apple's lawyers in the civil case in an attempt to have it dismissed seem valid in light of the possible Justice Department action. The Cupertino, Calif. company has already admitted to the central facts of the case, which could strengthen the government's position should Apple lose in civil court, although it attempts to argue its decisions were for competitive and financial reasons.

In the complaint against Apple, lawyers for the plaintiffs detail meetings between the publishers and Apple ahead of the iPad launch. Apple agreed to adopt a model where the publisher sets a price and Apple receives a 30 percent cut, called "agency pricing". The plaintiff's attorneys argue that previous to Apple's entrance, ebooks were sold at wholesaler and the retailer itself set the price.

"Apple knew that if Amazon were allowed to continue to solidify its position in the ebook market, these network effects would make it nearly impossible for Apple to dislodge Amazon in the near term", the filing reads.

Apple responds to these allegations by admitting that meetings did occur between the two parties, however, the company entered the market with zero market share and sales. It made a conscious business decision not to lose money on the sale of ebooks and agreed to agency pricing as a result.

"It would make perfect sense as a rational and competitive business strategy for Apple not to enter as a retailer incurring losses, but instead as an agent on commission with a competitive offering – which is exactly what the agency agreements negotiated by Apple accomplished", Apple responds.

While that argument might be sufficient to appease an antitrust judge, where the picture gets cloudier is the clause in which Apple essentially forced the publishers to renegotiate its contracts with competing retailers. Called "most favorite nation" status, the practice is coming under increasing fire from antitrust regulators who see it as anticompetitive.

"The effect of the MFN Clause ... was to increase prices and reduce competition for the ebooks of the Publisher Defendants", the plaintiff's filing reads in part. "This resulted in increasing and stabilizing ebook prices and eliminated competitive pricing".

Apple admits to using the strategy in its filing, but pushed it back on the publishers. "The agency agreements left it to each Publisher to set its eBook prices based on competition among the various book titles, with a proviso that if certain eBooks were being sold at a lower retail price elsewhere, the Publisher would match those prices at Apple’s iBookstore", the filing argues.

In the end, that doesn't answer the concerns of the Justice Department and antitrust regulators that the MFN clauses are anticompetitive, and begins to build the case that Apple may have played a part in "fixing" the price of e-books.

Settling Out of Court May Be The Wisest Move

With Apple all but admitting to what it's being accused of, the bar is higher to prove that its actions are not illegal. Especially in the area of MFN clauses, Apple is already fighting from a position that government antitrust regulators have already attempted to have invalidated in other antitrust cases. Such a case is also likely to be lengthy and damaging to Apple's reputation among consumers, should it occur.

Another certainty is with the amount of regulatory scrutiny, ebook prices look likely to fall some. Publishers are obviously more apt to avoid an antitrust suit, which could have the undesirable effect of these companies losing control over the pricing of its content. Settling out of court would allow them to maintain some control over pricing. In the end, that appears to be what the publishers want.

Coming Monday: An antitrust lawyer talks about the implications of the case and the government's chances of success.