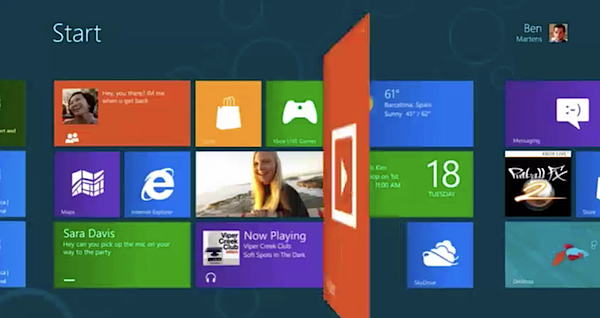 To continue from my "first impressions" review about Windows 8 Consumer Preview, I spent some time using it on a desktop computer this time. I now have both a tablet PC and a desktop with the OS installed. While I do want to see Windows 8 succeed, my impressions are not as positive on the desktop as the tablet, and I feel that some rethinking needs to go into Windows 8 and Metro before they're ready for release, especially for long-time Windows users.

The whole reason for the Preview (beta) of Windows 8 is to get feedback from users so Microsoft can make sure they do it right. I will try not to be overly critical, but I do want to be honest. I would rather see Microsoft hold back Windows 8 until they get it right, than to see it released too soon and not get the market acceptance they desire. So here goes.

My first concern is about backward compatibility for desktop applications and so far I am very pleased with the Consumer Preview. It even fixed one flaw I found on the Developer Preview (with layered windows), so that was good. Windows 8 has proven to be very backward compatible with lots of WIN32 (so-called legacy) code I tested and as far as I can see, the Windows API is alive and well. I tested the following:

Big Difference Between Touch and Mouse

There is a very big difference between using touch and the mouse when it comes to legacy applications, so be prepared. Some of the Common controls in desktop Windows (WIN32) are not well-suited to touch and would benefit from some serious reworking. The basic navigation using the mouse is improved and there are a number of shortcuts for navigation, but the real test is using actual desktop applications not developed by Microsoft.

Don't expect to be happy with all of your current applications, if you use them on a touch device. As a programmer, my personal view is that desktop applications need to be rewritten or modified for the touch environment. Metro is better suited to touch, so even though you can use a mouse, one may enjoy metro applications more on a tablet than on a desktop computer.

Metro and Desktop Apps are so Very Different

This much I can say, there are specific advantages to both Metro and the desktop. Metro's design for touch really requires that an app's user interface have a lot more empty space and larger elements suited to the size of one's finger. Because of this, Metro applications tend to use space on the screen poorly. You end up having to touch the back arrow button on many applications to move from screen to screen. Any user interface that requires a lot more detail (e.g., more UI elements per square inch) really still should be designed for the desktop, rather than Metro and also should be designed for the mouse.

Likely, most people who are using the Consumer Preview are just playing with it, but once a person gets down to business with it, one quickly finds out what works well in Metro and what works better on the desktop. If Windows 8 only had Metro it would be useless for a lot of business and power users. It is important to recognize when to use Metro and when to use the desktop.

Too Much Emphasis on Metro

I understand why Metro is being pushed to the forefront, but my own personal experience indicates that there is too much emphasis on it. For example, when I use Windows Explorer to display some files and then double click on an MP3 file, instead of the Windows Media Player (desktop version), I get a Metro version music player. It seems more like an advertisement for a music store with all sorts of covers to music albums in the background and only a few controls appear. Compared to the WMP, the experience displeases.

I have video driver problems, too, so when I installed some Metro games, they work with default Windows 8 driver installed, but I get a much smaller screen size (1024 x 786, when my monitor is 1680 x 1050) . More troubling is terribly slow response -- to the point of being useless.

I updated the driver so as to get the full-screen resolution, better hardware support and especially OpenGL support for my desktop applications, but, now, some Metro games simply won't work at all. I know this is a driver issue, because my desktop has a very common Intel onboard graphic chip (GMA 950) found in many mass-market computers, so a decent Windows 8 driver would have been appreciated with the Consumer Preview. I had the same problem with my ExoPC tablet, which definitely should have been supported, since I purchased it recently from, of all places, the Microsoft Store. Yet, there is no decent Windows 8 video driver for it either.

I have not found Metro applications to be "fast and fluid", but instead they tend to be slow and bloated. Now a few are well-designed, and I really like them, such as the "Cut the Rope" game. It is one fun game and works well for both touch and the mouse. I had no problem using the game on both my desktop computer and my tablet. As far as some of the other Metro apps, I spent too much time jumping from screen to screen (one can get tired of the back arrow button), so the intended fast-and-fluid feeling is lost.

Metro tried to emulate the Windows Phone 7.5 UI way too much and because of this it loses the feel of being on a real computer. It just cannot compare to the richness available to a desktop application.

Personally, I think the Windows Reimagined concept goes a little too far. Now Windows 8 and Metro are not a lost cause by any means and they do offer some exciting new features. What Windows 8 needs is to go back to its roots and to become Windows again.

This does not mean getting rid of Metro. It means blending Metro and the desktop metaphors better. I really think Microsoft could have a real success on their hands with Windows 8, if they just simply rethink why people use Windows in the first place and what they do with it.

Likely many users have very good suggestions on how this could be done, but Microsoft needs to be willing to listen carefully to the long-time user base. There are some extremes touted by some, such as dropping Metro entirely or dropping the Desktop entirely.

What Microsoft may not realize is that they possibly have a real "gem" in their hands with Windows 8, but only if they do it right, avoiding either of these extremes. Rather than "Windows reimagined" maybe it would be good to reimage Metro to see how it can better blend with the desktop.