I'm appalled by the sudden feeding frenzy about the Siri lawsuit, which was filed last week but only big-time hit the mainstream news yesterday. Now the damn thing is everywhere, and I've been asked to jump on the meat wagon and write something, too. Siri is the iPhone 4S "personal assistant".

It's all so pointless, going after Apple for beta software, about which advertising states "sequences shortened" for Siri's responses. New Yorker Frank M. Fazio is suing Apple because he bought a 32GB iPhone 4S from a Best Buy in Brooklyn on Nov. 19, 2011. Gasp, "plaintiff was exposed to Apple's representations regarding the Siri feature" -- that is according to the legal filing. Siri's alleged crimes: Failing to understand Fazio and giving him the "wrong answer". Apple's alleged misdeed: Misleading and false advertising.

I don't often have the lead party in a lawsuit so close to question. So I ask: "Siri, did you expose yourself to Frank M. Fazio?" To which she answers: "I don't know what you mean..." Mmmm, that could be regarded as a somewhat evasive response.

Fazio "would not have paid the price he paid for the iPhone 4S, if he had not seen these representations", according to the lawsuit. So, what, Siri is the only reason he bought iPhone 4S? Anyone reading this really believe that? I won't excuse my skepticism.

I'm confused. Why didn't Fazio return the phone? The lawsuit reads: "Promptly after the purchase of his iPhone 4S, Plaintiff realized that Siri was not performing as advertised?" Eh, what does, Bud? Stores have return policies for a reason. Did he not keep the receipt? He hasn't heard of eBay? Where iPhone 4S commanded top dollar last November. If Fazio knew "promptly", why didn't he get a refund promptly?

The legal filing presents some of these representations that so influenced the plaintiff -- a few from an Oct. 4, 2011 Apple press release. As a test, I ask Siri a question quoted in the PR: "Will I need an umbrella this weekend?" Siri produces a weather forecast and answers: "Yes, it's likely to rain this weekend". Holy heck, three days rain is coming!

From here, the lawsuit goes astray, and I hope the judge has a good watch and commonsense. The document refers to misleading Siri commercials that, for the most part, aired after Fazio bought iPhone 4S. What is he? A time traveller? Seeing the commercials in the future, they influenced his decision in the past?

"Is time travel possible?" I ask. Siri doesn't know and offers a web search. The first result leads to April 22, 2010 Discovery News story "Is Time Travel Possible?" "The short answer is that time travel into the future is not only possible, it's been done, and we've known about it for over a century", answers theoretical physicist Paul Davies. Oh my, I didn't know that. 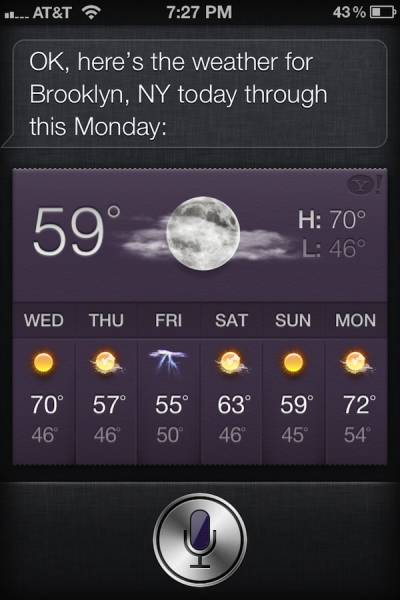 I decide it's time for a direct question. "Siri, do you give inaccurate and misleading information?" "I'm sorry, Joe, I'm afraid I can't answer that". Oh? Man, those Apple lawyers are fast. Surely Siri has been instructed by legal counsel not to answer questions about an ongoing lawsuit. ;-)

I change tactics. It's time for a misdirecting question: "Siri, where is Steve Jobs?" There's a tinge of hurt in her response: "Apple doesn't tell me everything, you know".

"What is the distance between San Diego, Calif. and Caribou, Maine" (where I live to my hometown). "Here are the directions to San Diego," Siri responds, displaying a Google Map.

After a response like that I ask: "Siri, do you give people accurate information?" Suddenly, she is defensive: "This is about you, not me".

Mmmm. If Fazio's claim about misleading or inaccurate information is correct, then perhaps the web search found the wrong guy. What's a doctor doing suing Apple anyway? I could understand a lawsuit against a doctor using Siri as a diagnostic tool. Uh-oh, maybe that heartburn really was a heart attack (and Siri got it wrong).