The crimes of the Chinese, Foxconn, Mike Daisey and ourselves 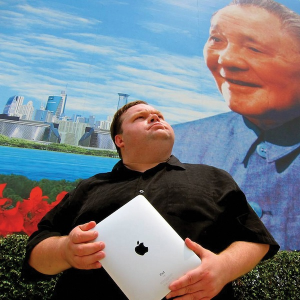 Editor: This weekend, esteemed radio program "This American Life" aired "Retraction" -- a stunning refutation of its most popular episode ever -- "Mr. Daisey and the Apple Factory", which aired on January 6. A "Marketplace" investigation has revealed that Mike Daisey fabricated or exaggerated aspects of the stage play upon which the segment is based. In April 2011, long before the TAL episode aired and the Apple controversy and protests following it, Larry Seltzer attended the stage play and expressed doubts about the presentation's accuracy. We reprint his review, which takes on stunning prescience in context of TAL's retraction.

I had no idea what I was going to see when relatives took me out in Washington DC to see The Agony and the Ecstasy of Steve Jobs starring -- exclusively -- Mike Daisey. I didn't expect a political polemic. I'm still not totally sure what to make of it. Daisey's style is a monologue, a combination of storytelling and lecturing, just him on the stage. It was a hell of a performance and this was his second show that day.

There are two stories Daisey tells as he sits at a simple table on a complex chair (it's made from recycled plastic and is described in the program). First, he tells the story of Apple and his love for their products. Second, he tells the story of his trip to Shenzhen in China, in particular to the Foxconn facility in the Special Economic Zone, where Apple's magical iPhones and many other products are made. Daisey researched the second story by going to Shenzhen, hiring a translator and faking his way in for a Foxconn factory tour posing as a prospective American businessman. Then he stood outside the fence and interviewed employees on their way out after their shift.

Foxconn is not a happy place, as Daisey tells it. The facility is a high-tech Dickensian workhouse where underage (down to 13 year olds) are made to perform simple, repetitive actions over and over again through brutally-long shifts.

I won't bore you with the story of Apple, since most of it is Apple History 101 that you all passed back in high school. Suffice to say that Daisey talks of how Apple is the success it is because of the peculiar genius and talents of Steve Jobs and what a total asshole the man is. Daisey talks, for example, of how Jobs manipulates and rips off his friend Steve Wozniak early in company history. Think of the stories you hear about Paul Allen and Bill Gates and you'll get the picture. Incidentally, after seeing the perfomance himself Wozniak says (in The New York Times):

The shocking things that Mike said which brought me to tears were so because they came as a first-person story...Mike was living the pain of what he was describing as he told it.

One point Daisey makes about how Foxconn works that is downright interesting is that our image of electronics manufacturing is wrong. Your notebook and your iPad aren't assembled by robots. They are assembled by hand by the huge number of dirt-cheap employees in these sweat shops. It's cheaper to have armies of human beings doing nothing but plugging cables into boards and screwing boards down to plastic enclosures all day than to have a machine do it. This makes sense in a way, even if it paints an ugly picture.

The employees are put through double- and triple-shifts. They must keep the assembly line moving no matter what pain or other problems they have or they risk "demerits," Daisey claims. They live as techno-serfs in company dormitories on the vast Foxconn campus where over 400,000 employees work. When they get injured they are shoved out the door with no help, Daisey asserts.

The companies and government are, of course, in conspiracy to keep business moving at the expense of the cheap and disposable employees. The labor boards and phony government-run unions are in league with it to find and blackball "troublemakers" who complain about being made to work overtime without pay for it and other such complaints.

These conditions hit the news in the last couple years as a string of suicides occurred at Foxconn. I believe Daisey said that there were "dozens" but the highest number in the news sources I've found is 14. Daisey describes how the factory, when he was there, had netting up near the roof of the buildings to prevent employees from jumping, and he asserted that this was the only action taken by the company.

The Al Jazeera report below shows one company response, stating that the suicide rate is in fact much lower than in the country as a whole. This is certainly crude, and perhaps cynical, but as I said there are over 400,000 people working there. You'd expect some suicides now and then even for reasons unrelated to work. Anyway, watch the video.

Are the "Facts" All Right?

Many people will see Daisey as telling the refreshing truth, and perhaps he is doing that. But it's not like I have a whole lot of corroboration for what he said in the show. There are some sources of generally corroborative information, such as China Labor Watch, which tells similar stories about Foxconn. But Daisey also drops a few specific claims that just don't sound right to me, such as when he says that over 50 percent of the electronics we buy are made in Shenzhen. It's not like I have the numbers, but I'll believe them when I see them from a more reputable source. Or when he gave the population of Shenzhen as over 30 million, when other sources I looked for have it (as of 2009) at just under 9 million.

One more thing, although it's not a major point: The process Daisey describes is just that of final product assembly. The employees are putting components together, but those components -- the circuit boards, the displays, connectors, the cables -- all these are certainly made in a more automated process.

I also thought that Daisey misleads by implying, as he does, that Western companies are running things in China. The Chinese government, he says, invited in "our" corporations and asked them to run things. But the companies in these zones are Chinese or, as in Foxconn's case, Taiwanese. (Isn't it remarkable how China can deny the legitimacy of Taiwan as a separate nation, and regularly threaten them militarily, yet still do business with them on such a large scale?) In fact, if Western companies were directly running things conditions would be much better because Western consumers and governments would demand it and would have real leverage. But having local companies works out much better for everyone, except the employees of course.

Foxconn is certainly aware of their image problem and Apple also expresses concern, at least for appearance's sake. I'm as skeptical of company propaganda as the next guy, but the Foxconn "Corporate Social & Environmental Responsibility Report" (2009) describes a multitude of programs and facilities to assist employees, from mental health counseling, employee training and development and academic assistance. Pictures of the employee gymnasium, table tennis room and the employee talent show (Foxconn's Got Talent!) show a progressive and healthful environment. And speaking of environment, the document says that:

Gee, the Foxconn employees in the picture sure look happy...

Working There by Choice

I have no trouble at all believing that Foxconn's reports are lies and that the truth is closer to Daisey's picture of oppression. But I'm not going to assume that everything Daisey says about Foxconn, their workers and we, the consumers of the products those employees make, is factually true or morally persuasive.

Remember, all these employees went to those companies because there was even less for them back in their villages. They stay there because they earn money that's not available to them back home. Remember also that those employees dread demerits that could lose them their employment.

Is this fair? I guess not, but as a general rule life's not fair. The reason all those factories are in China is because there is cheap labor available. If the factories were somehow compelled to treat their employees well and pay Western wages there wouldn't be any point to having factories there.

The fact that these factories might be better than the alternatives for the average Chinese doesn't make anything the company does reasonable or acceptable. I would just caution that people advocating changes be certain of their facts, and I know I'm not certain, and be alert for the possibility of unintended consequences, all too often the bane of liberal social policy.

What about us? What should we do? On the way out of the theater the night I saw Daisey we were handed a paper entitled "What Happens Next?." There's some good advice in there, although I would change the order of the points he makes to start with educating yourself. He also advocates telling others, "thinking different" about upgrading and emailing Steve Jobs.

Is it wrong to buy an iPhone because of the way the people who assembled it were treated? Start looking at things like that and you're treading into deep waters. Should you not buy gasoline because Saudi Arabia oppresses women? Should you instead try for wind and solar power, the components for which are largely built in China? Peasants in Latin America have a rough life, so should you not drink coffee? And you'll probably have to end up making your own clothes because despite some serious efforts stop it, sweatshops in the textile and apparel businesses are still common.

America used to be more like this, too. It was recently the 100th anniversary of the Triangle Shirtwaist Factory fire, the deadliest industrial disaster in the history of New York CIty, in which 146 garment workers died horribly because of unforgivable work conditions. What changed is that society was outraged enough that unions and government were able to effect changes. This is possible in a democratic system.

I'm of the opinion that things in China won't really change until political freedoms become more Western-style. Maybe I'm an insensitive cultural imperialist, but maybe Chinese culture teaches way too much deference to authority. The Communist Party pays lip service to the idea of revolution but regularly makes a mockery of the notion by suppressing any meaningful dissent. The list of one-party states that are free and socially responsible is certainly a short, and probably empty one.

Larry Seltzer is editorial director for BYTE. He freelanced for BetaNews when this story first posted in April 2011. Seltzer is a long-time tech journalist, specializing in security matters.

23 Responses to The crimes of the Chinese, Foxconn, Mike Daisey and ourselves