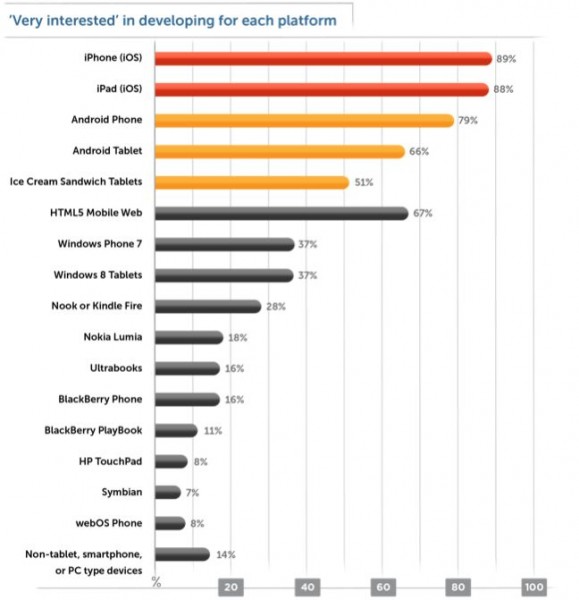 Market research firm IDC and mobile platform services company Appcelerator have released the results of a developer survey that examined the attitudes, ideas, and plans of mobile application developers in the first quarter of 2012.

Principal among the survey items was developer interest in platforms. Unsurprisingly, iOS remained the top platform for developers, followed by Android (phone). Third place, beating out Android tablets, and indeed all the remaining mobile platforms, was HTML5 Mobile Web.

Some 79% of mobile developers reported that they would integrate some form of HTML5 into their apps in 2012.

It is important to note, however, that developers weren't talking about pure Web apps. In fact, less than six percent of developers said they were considering pure browser-based applications. Instead, the majority (72%) said they expected to use it in hybrid applications, with limited amounts of native code and HTML5 providing the content. By doing this, developers can reduce the amount of platform-specific iOS and Android work they do, and fill in the gaps with OS-agnostic HTML5.

"This is kind of interesting among the backdrop of most of our developers building five or more applications," said Michael King, Principal Mobile Strategist at Appcelerator. "They believe that, sort of like a golf club, HTML5 is a good club to have in your bag, but it's certainly not going to help you win the PGA tour unless you have all of those clubs." 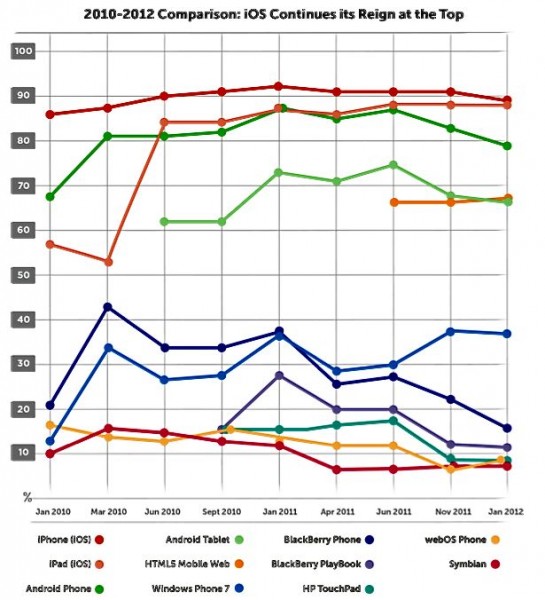 At the same time, BlackBerry's poor start to 2012 had developers looking elsewhere. After market share declines at the end of the year, RIM started 2012 with a major executive shakeup, and then followed with a tepid introduction of a "new" BlackBerry strategy, developers in January and February 2012 were highly unimpressed.

Developer interest was 20.7 percent in the fourth quarter of 2011, but after the unfavorable beginning of the year, it dropped to 15.5 percent, behind Ultrabooks, Nokia's Lumia Windows Phone, Bookseller tablets Nook and Kindle Fire, Windows 8 tablets, and Windows Phone.

In fact, interest in the BlackBerry Phone platform was nearly equal to the interest in embedded and non-tablet, PC and Phone systems.