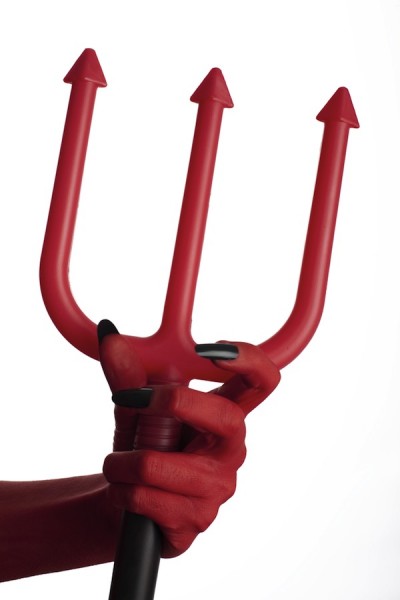 In the Biblical story, the serpent tempted Eve by offering something she desired -- to be like God. It's appropriate metaphor for every shyster that followed. Evildoers follow a consistent pattern of offering something tempting that masks something else. It's the art of misdirection that assures them power or profit -- often both. If there is a definition of evil, it's taking advantage of others for personal gain. The more people, the more evil. Greater the trickery, eviler still.

That sums up my assessment of Google's non-voting split revealed yesterday concurrently with first-quarter earnings. Stock-split seemingly gives investors twice as many shares as they have now. But half will be non-voting ones, diluting shareholders' say in Google's doings. Essentially, the company seeks to have it both ways -- be private while having the benefits of public investment. The most disruptive company of the 21st century is at it again. The implications are seemingly astounding.

As I opined in December 2010: "If there is a devil, a Great Satan of modern technology companies, Google is it". Yesterday's stunning proposal is more confirmation.

From the Founders' Letter signed by Larry Page and Sergey Brin:

Today we announced plans to create a new class of non-voting capital stock, which will be listed on NASDAQ. These shares will be distributed via a stock dividend to all existing stockholders: the owner of each existing share will receive one new share of the non-voting stock, giving investors twice the number of shares they had before. It’s effectively a two-for-one stock split -- something many of our investors have long asked us for. These non-voting shares will be available for corporate uses, like equity-based employee compensation, that might otherwise dilute our governance structure.

We recognize that some people, particularly those who opposed this structure at the start, won’t support this change -- and we understand that other companies have been very successful with more traditional governance models. But after careful consideration with our board of directors, we have decided that maintaining this founder-led approach is in the best interests of Google, our shareholders and our users. Having the flexibility to use stock without diluting our structure will help ensure we are set up for success for decades to come.

Google offers shareholders a two-for-one split, something tempting that many desire, while taking away their participation as owners. "Without diluting our structure" really means the authority of Google's two cofounders and its board of directors making decisions independent of and without interference from shareholders, who by their investment are company owners, too. The two-for-one non-voting stock split is a devil's deal.

Google will now have three classes of stock, which structure favors minority shareholders. Brin, Page and Executive Chairman Eric Schmidt are the largest last time I checked, controlling about two-thirds of voting shares. The new change will entrench them and other investors holding or acquiring large blocks of shares. From the perspective of control, and founders' ability to make long-term investments and strategic decisions independent of the whiles of quarterly earnings, there's some sense to the approach. But as a precedent for other public companies, Google's plan is pure evil.

Dual-class voting shares were illegal for most of the 20th Century, but came back in 1986. James Sterngold’s NYT story on their reintroduction is well worth a read, featuring as it does comments against the new rules from both Felix Rohatyn ("The one-share, one-vote rule is pretty fundamental to the market") and T Boone Pickens ("Let’s face it, managements want this because they want to entrench themselves. They went to Congress to get protection and they didn’t get it. So they went to the exchange to get protection, and they got it.")

Google isn't giving investors say in the plan, not that the three minority shareholders need it since they control the majority of voting stock. Again, this is about the cofounders trying to have the benefits of being private and public. "These non-voting shares will be available for corporate uses, like equity-based employee compensation, that might otherwise dilute our governance structure" -- meaning "dilute our control". Like the shyster making distracting promises, the founders cajole: "It’s important to bear in mind that this proposal will only have an effect on governance over the very long term".

Evil is a word often associated with Google, in part because of its "Ten things we know to be true" -- principles by which the company operates. No. 6 states: "You can make money without doing evil". Perhaps you can, but Google hasn't. Its highly disruptive business model is at the core about using others for corporate gain.

What I call "Google free" robs value from nearly everything it touches, largely because of the search keyword and advertising business model. Someone else pays to produce content or other valuable intellectual property, around which Google wraps search keywords, ads and services. The information giant doesn't produce content, but its entire business model is about cannibalizing others' valuable intellectual property. Google's search dominance -- anywhere from 65 percent to 90 percent share, depending on the geography and analyst crunching the numbers -- means that content creators must pay homage to free.

Content's base value to the producer is at least the cost of production, but content creators are compelled to give away their stuff for less and often for free. If not, the content becomes invisible to the Internet -- or at least to the majority of people who use Google search and other services.

Microsoft cofounder Bill Gates laid out a different business, one where people get paid for production, in 1976 "An Open Letter to Software Hobbyists." Gates wrote:

Most of you steal your software...One thing you do do is prevent good software from being written. Who can afford to do professional work for nothing? What hobbyist can put 3-man years into programming, finding all bugs, documenting his product and distribute for free?

Gates' question "Who can afford to do professional work for nothing?" is strangely prescient of today's expanding Google free -- supported by advertising -- business model. The question also defines one of the principles behind Microsoft's worldview -- that people (or the businesses they work for) who create something have a fundamental right to profit from it.

All companies have a worldview that defines their behavior. Google's is openness, which I explored at length in December 2009 post "Google's 'Open' definition: Simply brilliant business, but is it evil?" Contrary to public perception, Google free isn't some altruistic openness but a business model, which its search monopoly anchors.

When I look at Google's non-voting stock-split proposal, I see behavior consistent with overall business tactics. Google offers something seemingly compelling to gain much more. Like Google devalues content that news and many other organizations pay to produce, this plan devalues public stock, stripping away its most important attribute: The right of owners to vote.

47 Responses to Google is evil