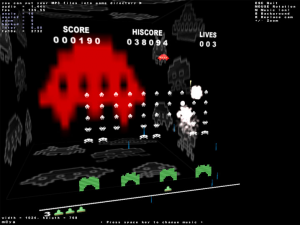 If you’ve played a few PC-based recreations of Space Invaders then you’ll know they can be, well, more than a little basic. And that’s a shame. Sure, we know the 1978 arcade original wasn’t exactly a visual feast, but that’s no excuse for the basic graphics and dull soundtrack you so often see in more modern versions.

At first glance, it didn’t look as though Space Invaders OpenGLwas going to do much to change our views. A portable game, its single executable is only 662KB in size, which doesn’t exactly leave much room for extras. (To put that in perspective, Civilization V’s music files alone require more than 1,500 times as much hard drive space.)

But, how wrong we were.

Launch Space Invaders OpenGL and you’ll find an attractive recreation of the original arcade game. The alien ships are blocky, but still look good; the controls worked just as we expected (arrow keys to move left and right, Ctrl to fire); and the soundtrack is appealing, at least for a while (and if you get bored you can turn it off, or even replace it with your choice of MP3s).

There are gameplay surprises, too. As well as avoiding the missiles, there are power-ups to collect, and one of the first will transform your fairly basic cannon into a sleek dual-laser spacecraft, which will quickly blast a very large hole in the approaching alien forces.

And presumably because the developers wanted to show off the advantages of OpenGL, there are some neat graphic touches. You can run the program full-screen or in a window at your choice of resolutions and quality settings, for instance. By clicking and dragging with the mouse you’re able to rotate your view of the screen, for an interesting look (check the capture here). And the game itself uses similar effects at key moments. When you “power-up”, for instance, the new spacecraft doesn’t just appear: the whole display spins and rotates for a much more dramatic effect.

Of course, for all of this, it’s still just space invaders, and all you’re doing is moving left and right and hammering the Ctrl key. If you like depth from your gameplay then you’re probably going to be a little disappointed.

If you enjoy these old arcade favorites, though, Space Invaders OpenGL is definitely worth a look. There are occasional irritations -- it really needs a “pause” key, for instance -- but otherwise there’s more than enough here to keep you entertained for an hour or two.

7 Responses to Space Invaders OpenGL is all retro fun