Why flatten Windows 8? Because Aero won't run on a phone 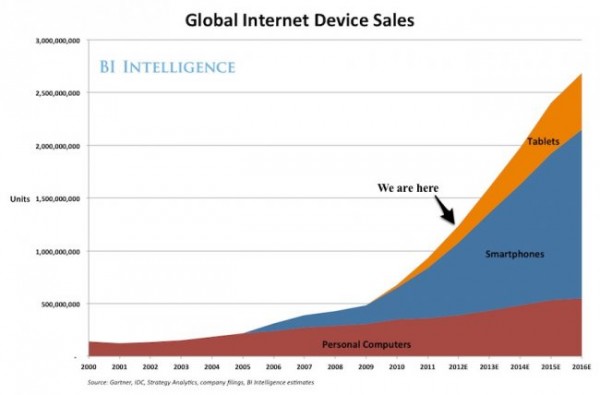 Beta versions of Windows 8 this week lost their nifty Aero user interface, which Microsoft’s top user interface guy now calls "cheesy" and  "dated" though two weeks ago he apparently loved it. Developers are scratching their heads over this UI flatification of what’s supposed to become the world’s most popular operating system. But there’s no confusion at my house: Aero won’t run on a phone.

Look at the illustration for connected device growth. It shows projected growth in Internet devices.  Keep in mind while reading this that a PC lasts at least three years, a phone lasts 18 months and nobody knows yet how long the average tablet will be around but I’ll guess two years.  Adding that knowledge to these sales projections and we can see that mobile devices (phones and tablets) have become the game in software and whoever has been shouting about that at Microsoft is finally being heard.

This chart suggests that Microsoft’s OS and application dominance will quickly decline if they don’t get a whole lot luckier in phones and tablets. So Microsoft is going all-in on mobile and the bet-the-company way to do that is to make sure the Win8 kernel will run on all three platforms.  That’s a common code base from top to bottom, which should make Grand Theft Auto be an interesting phone experience, eh? But since phones still aren’t a match for desktop hardware, that means necessarily dumbing-down Windows a bit to help the merge to converge.

These beta versions are aimed mainly at developers, of course, and that’s the point: mobile development is now more important than desktop -- to everyone.

Microsoft certainly expects (hopes) phone hardware to dramatically improve in the next few months. That’s a good bet. But it also suggests that Windows 8 Phone, if that’s what it is called, will run a lot better on expensive phones than it will on cheap ones. And that’s not a recipe for global domination. Microsoft’s answer, I’m guessing, will be subsidies to smart phone buyers like the $400 PC subsidies we saw in the early broadband era of the mid-1990s.

As a good friend of mine likes to say who knows Microsoft very well, "the Devil always pays cash".

20 Responses to Why flatten Windows 8? Because Aero won't run on a phone