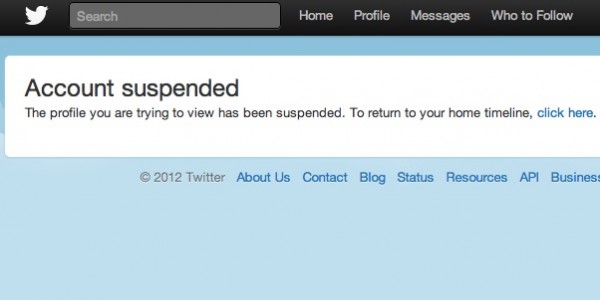 As criticism over NBC's coverage of the 2012 Olympics in London grows, the network now finds itself at the center of a controversy surrounding its apparent involvement in the suspension of the Twitter account of an American journalist.

Guy Adams, the Independent's Los Angeles bureau chief, has been extremely critical of NBC's coverage of the games. In a series of tweets, Adams takes on NBC's decision to run almost no major event live, and Matt Lauer's sometimes inane banter during the Opening Ceremony coverage. Adams even went so far as to criticize NBC Olympics president Gary Zenkel.

But there's one tweet that apparently ticked off executives at Comcast-NBC enough for them to seek out Twitter to silence Adams, and here it is:

guyadams Guy Adams
The man responsible for NBC pretending the Olympics haven't started yet is Gary Zenkel. Tell him what u think! Email: [email protected]

Adams' decision to publish Zenkel's e-mail is apparently what caused NBC to complain directly to Twitter, and successfully have Adams muzzled. "We filed a complaint with Twitter because a user tweeted the personal information of one of our executives", a spokesperson for NBC Sports says in a statement.

So far, Twitter has not responded to BetaNews' requests to confirm that the network's complaint is behind their decision. That said, in a Monday piece for The Independent, Adams reports that Twitter support representatives told him that the aforementioned tweet is why his account is suspended.

"Since I’m still trying to get to bottom of the hows and whys of my suspension, which conceivably raises various ethical issues relevant to journalism in the online era, it seems premature to comment further", Adams writes. "Except, perhaps to say that I do not wish Mr Zenkel any harm, and to share a transcript of my most recent email to Rachel Bremer, Twitter's head of European PR".

In that e-mail, Adams tells Bremer that no rule was broken as Zenkel's e-mail is not private. Adams is right: a simple search for the executive's e-mail address will turn that information up (even after you take out all the results from the dozens of news outlets now covering this story, which are also republishing Zenkel's address).

There's another problem: Twitter really isn't following its own rules. The policy against the sharing of certain information on Twitter only covers "non-public, personal e-mail addresses". Zenkel's address is already public, and it is a corporate e-mail for a public company.

Under a strict reading of this policy, Adams has violated none of Twitter's rules, and his suspension sounds more like a move to appease an advertiser. As a story last week in the Wall Street Journal indicated, the two companies are working together to "tweet" the Olympics, with a full-on Olympics Hub to centralize coverage of the games.