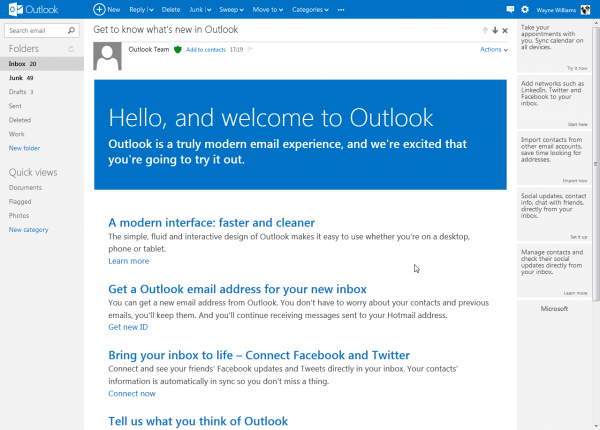 Today, Microsoft unveiled the latest incarnation of its popular Hotmail service, and as well as a new look it’s been given a new name, although it’s one that everyone in the business world will be intimately familiar with -- Outlook.

This rebranding is a huge step for Microsoft and signals the death of Windows Live, which never really caught on in the way the company would have liked.

Although Outlook will replace Hotmail in time, during the preview period the new service will actually run alongside it. Microsoft says it will listen to users and fine tune the experience accordingly, before upgrading everyone in due course. Hotmail users can sign up for an outlook.com address immediately though, so if you’re not happy with your current handle, you’ll need to move quickly to get the one you want.

The new webmail service’s interface is white and blue with a clear Windows 8 motif and is considerably cleaner than the old muddled design. According to Microsoft the layout has 60-percent fewer pixels in the header and allows for 30-percent more messages in your inbox. It’s been created to display equally well on desktops, tablets or phones, and work with Exchange ActiveSync.

Outlook includes free Office Web Apps -- Word, Excel, PowerPoint and OneNote --  as well as SkyDrive. It also lets users connect their Facebook, Twitter, LinkedIn and Google+ accounts and view the latest updates from them in their inboxes. Facebook Chat is baked-in, and Skype support is coming soon, which is hardly surprising seeing as Microsoft owns the VoIP service.

The thing that most people hate about Hotmail is spam, and so the new Outlook is doing its bit to combat this. It will automatically detect mass mailings and place them in separate folders. You’ll be able to move or delete their contents in a few clicks.

Provided you’re not using an Ad blocker, relatively unobtrusive text adverts appear in a column on the right-hand side on the main screen, but not when you’re actually reading emails. Unlike Gmail, the service won’t scan your personal messages to serve up tailored ads.

While the new design won’t be for everyone’s tastes, I think it’s a definite improvement. But what do you think? If you abandoned Hotmail in favor of an alternative service, does this offer enough to tempt you back?