Apple is not smart, Samsung is the Borg 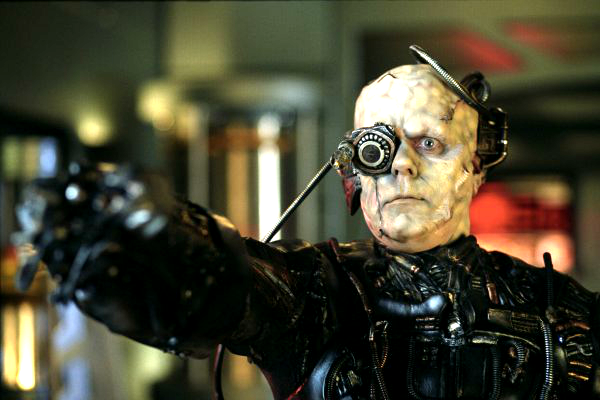 I was supposed to be on CNN on Monday night to comment on the Apple v. Samsung patent infringement trial that just started in San Jose, Calif., but then presidential candidate Mitt Romney insulted the Palestinians and I was bumped. The way these things work is CNN calls the day before so I have time to think up something pithy to say. The question now is what to do with all that pith? So I’m dumping it on you. Consider this the long distance view of this legal battle in the context of what it really is -- brands at war.

As a practical matter, I think it is very unlikely that Apple can win based on its accusation of “slavish copying”. We have laws based around copyright and patents for that, and if patent or copyright had been broken, this would be an easier case. I suppose there may be laws that cover “slavish copying”, but my guess is that it is something hard to prove. Even if the products look similar, the internals are likely to be quite different, as is the OS.

If I were Apple, knowing that Samsung is the only other game in town (just as Sony was in the iPod days), I would use every method possible to slow them down. Lawsuits show a sign of desperation frankly, and that is likely to be the case here. Consumer electronics is characterized by commoditization and Apple had better get used to that fact. Just look at the DVD -- invented by Sony and Toshiba, yet commoditized by Samsung. Who won there? Same with TVs, feature phones, VCRs, monitors.

The weapons available to Apple are, as they were for Sony in the Walkman days, difficult stuff like continuous innovation, building a brand and maintaining it (that is what I think this lawsuit is really about by the way), distribution, getting a lock on the supply chain, getting a lock on content, and very occasionally using the International Trade Commission and lawsuits.

Apple needs to do all of this and not just rely on innovation because, unfortunately, as Samsung and previously Microsoft have shown them, they can’t win on innovation alone.

Apple needs more retail outlets for iPhones and iPads and should use their muscle to get exclusives where they can. They need to lock up supply of certain components. They should buy content and possibly its distribution (more on this below). That is, if Apple is smart.

Steve Jobs was resistant to some of these tactics because of his notorious fear of distraction. Well Steve is gone, Apple ledership has broadened somewhat, and the people today running the place have to get beyond Steve’s legacy -- if they can.

So the first thing Apple should do is buy Disney.

Samsung doesn’t have to do anything different. Samsung is the Borg.

And that’s what I would have said on CNN.

27 Responses to Apple is not smart, Samsung is the Borg