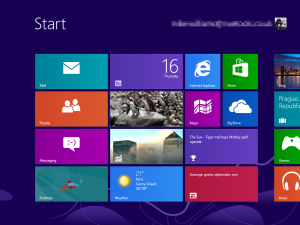 Windows 8 is finally finished, and we now know it’ll be available from October 26. If you really need to see what it can do right now, though, Microsoft have just released an evaluation edition of Windows 8 Enterprise that can download and try for free.

And that means you’ll get access to several more corporate features which aren’t available in the regular or Professional Windows 8 editions. Like Windows To Go, for instance, which allows the operating system to boot and run from USB drives.

Beware, though -- this isn’t quite as generous as it sounds. The build will expire after 90 days, and you won’t be able to revert to a previous edition of Windows, or install a new copy over the top of the evaluation build. It’s really just for testing, not long-term use, so once the 90 days are up you’ll probably want to reformat and start again.

Still, if you only want a quick look at “what’s new” then the Enterprise edition is a simple way to do it. Especially if you run it from Oracle VirtualBox, say, which will allow you to run Windows 8 in a window on your Windows 7 desktop.

And this is very easy to set up. Install VirtualBox, click New, give your VM a sensible name and choose Windows/ Windows 8 as the operating system and version, give the VM as much RAM as you can spare, but otherwise accept the wizard’s default settings.

Then launch the VM, point it at your downloaded Enterprise edition ISO file, and within a moment or two the Setup program will launch. Follow this as usual and you’ll be viewing the Windows 8 desktop surprisingly quickly (the entire process took under 10 minutes on our trial PC).

Just keep in mind that Windows 8 introduces some new issues with screen resolution. In particular, you’ll need at least 1024×768 to access the Windows Store and run apps, and to snap apps – run two side-by-side – requires a resolution of at least 1366×768. If this is a problem then launch the Desktop app, right-click an empty part of the desktop, click Screen Resolution and choose whatever you need.