The quest for the best search engine: Bing It On 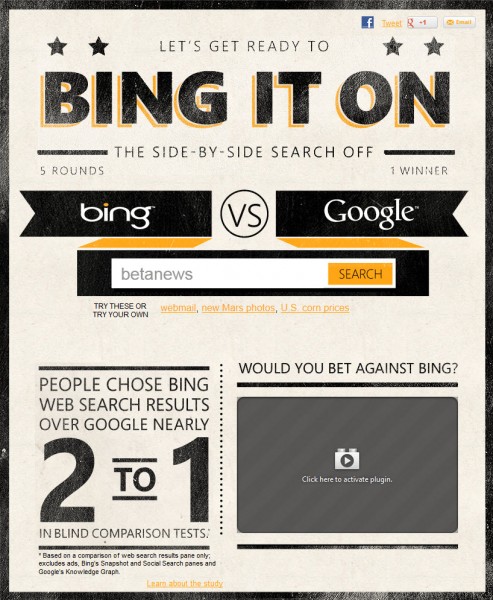 If you had to name your favorite three search engines, which would they be? It is almost certain that Google would make the list, and that some Internet users may have trouble naming more than one or two as they rely solely on a single search engine for all of their searches.

Bing may be on that list, although it is less likely that people from outside the United States will name the search engine, as its localized results are not really on pair with its English results. Tech savvy users may name DuckDuckGo or Ixquick, two niche search engines that promise better privacy and unfiltered results that do not put users into a filter bubble. Regional search engines, Chinese Baidu for instance, may also be added to the list by people from those regions.

If you have used Google Search for the past five or so years, you may have noticed that the search engine has evolved quite a bit in that period of time. From delivering organic search results with barely any distractions on the results page, to an ad-focused search engine that puts advertisement and Google's own products first, and organic search results second more often than not.

Google's market share despite those changes has not dropped. In fact, if you believe NetMarketShare statistics, the company's market share has increased over the last 10-month period globally.

Microsoft believes that this can be attributed more to the Google brand than to search relevancy. To prove the thesis, the company asked research company Answers Research to conduct a blind comparison test with 1,000 people from across the United States.

The test displayed Google and Bing search results next to one aother, with advertisement, internal links and information removed. Participants were asked to conduct 10 searches using queries of their choice, compare the results and decide which side, if any, offered the better results.

Microsoft is confident that people from all over the globe will come to the same result if they participate in the blind comparison test. And so, Bing It On was born.

You can run your own set of search relevancy tests at "Bing It On" to find out which of the two search engines provides the better results. You only get five comparison rounds instead of the ten that people who participated in the study got. If you want 10, you can simply run the blind comparison test twice to reach that number. As far as search queries go, you can either enter your own or pick random suggestions that Microsoft displays on the page. 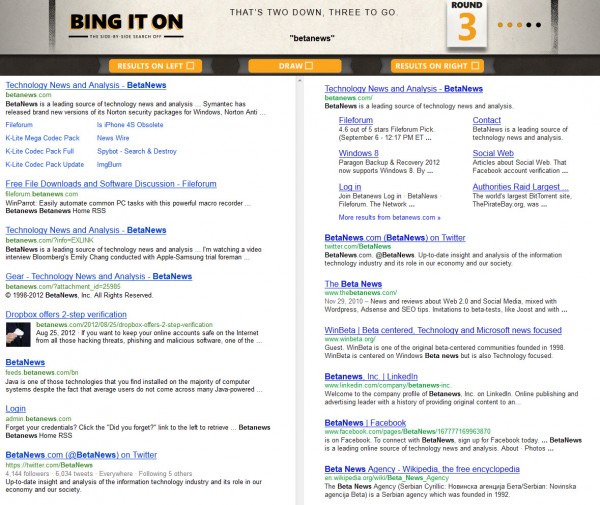 Experienced users may still be able to identify Bing and Google search pages based on a number of design choices on those pages. Indicators include the site wide links, how video and image results are displayed, and whether author profile pictures appear in the results.

The results page lists a winner, or a draw, and the five search queries and the search engine that you have picked. 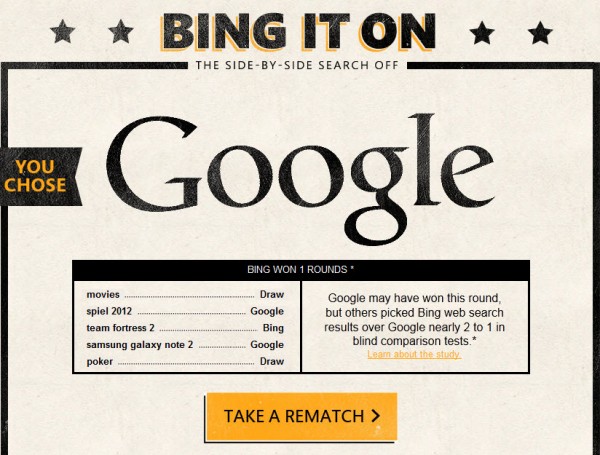 It is likely that you will get mixed results with Google and Bing each winning rounds. Will it be enough to convince you to switch to Bing, or use Microsoft's search engine as an alternative? Or are you using a different search engine as your primary search engine already?

12 Responses to The quest for the best search engine: Bing It On