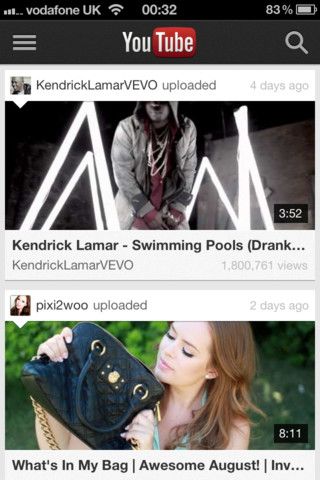 Ahead of the Apple event rumored to be the unveiling of a new, smaller iPad, Google on Tuesday released an updated native YouTube application for Apple's smaller-screen iOS devices.

The new application for iPhone and iPod touch speeds up video discovery with an improved channel guide and search functionality, improved sharing capabilities, and a larger roster of compatible videos.

While this update is not heavy on additional new features, it has significant relevance for two big reasons. Firstly, iOS 6 is the first version of Apple's mobile OS to not include the YouTube app by default. In early August, Apple said its YouTube licensing agreement had expired.

Possibly due to the fact that Google is not collecting licensing fees from iOS this time around, this update to the YouTube app brings advertisements to the platform for the first time. Previous versions of the application did not allow certain videos to be played on iOS devices. Now, older versions of iOS running outdated versions of the YouTube app appear to no longer be able to connect to YouTube in any way.