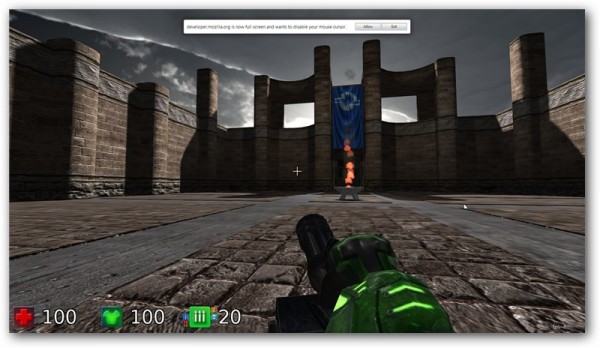 Google has released Chrome 22 FINAL, with the promise of improvements for Windows 8 users, gamers and those using HiDPI and Retina screens.

Chrome’s gaming enhancements revolve around support for the Pointer Lock JavaScript API. Otherwise known as "mouse lock", it allows sites to “capture” the mouse and provide the user with an immersive experience that isn’t constrained by the mouse cursor’s position relative to the edges of the browser window.

The mouse lock feature will be of particular interest to gamers as it means both 3D web apps and games such as first-person shooters can now remove the mouse cursor from the screen and access mouse movement directly, allowing users to explore the 3D world without worrying about bumping into the edges of the screen.

By way of demonstrating the feature, Google has pointed users towards BananaBread, a 3D first person shooter available  -- somewhat ironically -- through Mozilla’s DemoStudio. Once loaded, you’ll see a request asking you to allow the app to disable your mouse cursor -- click Allow to do so, at which point the mouse is “captured” by the web app and used exclusively to control it. Pressing [Esc] returns control of the cursor to your OS.

Chrome 22 also continues to refine support for the latest high-definition screens that was added in version 21 with some unspecified tweaks. Similarly unspecified are the reported enhancements when running Chrome in Windows 8.

Google Chrome 22 FINAL is available now as an open-source download for Windows, Mac and Linux. Google Chrome 23.0.1271.6 Dev is also available for early adopters – note it installs over the top of Chrome FINAL, so should be approached with extreme caution.