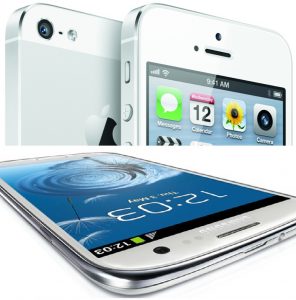 In a move appropriate for another two-party presidential election season, there is now little room for three dominant smartphone operating systems. The US market is now decisively consolidated around just two, Apple and Google platforms, as rivals -- including BlackBerry and Windows Phone -- make brisk retreats.

For the three months ended in August, Android and iOS had combined 86.9 percent smartphone subscriber share -- that's up from 82.8 percent at the end of May, according to comScore. August 2011: 71 percent. As combined share approaches 90 percent, a third-party contender looks less likely. Both potential candidates lost share during the three months, all gobbled up by the leaders.

The point: The two dominant platforms also took share from others, mainly Symbian, giving up nothing for the others. The trend forebodes trouble as Microsoft and RIM launch new operating systems -- Windows Phone 8 and BlackBerry 10, respectively.

Among manufacturers of all devices (smart and not), Samsung share remains stuck, largely unchanged -- down slightly -- for most of 2011. In August: 25.7 percent, up from 25.3 percent a year earlier. Apple, by comparison, made tremendous gains, with US subscriber share rising from 9.8 percent to 17.1 percent August to August. At this pace, Apple tracks to take the No. 2 spot from LG this year.

While Apple and Samsung are posed to become the overall phone leaders, there is plenty of room for a third or even fourth major competitor. LG and Motorola retreats are significant but not blood loss like Microsoft and RIM smartphone platforms. Fourth-ranked Motorola's share fell to 11.2 percent from 14 percent year over year, while LG retreated to 18.2 percent from 21 percent. However, their losses all went to Apple, which subscriber share grew 75 percent year over year. 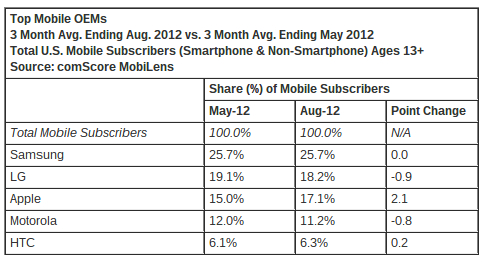 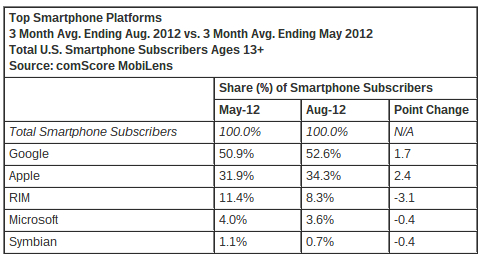 22 Responses to US smartphone market consolidates around Android, iPhone