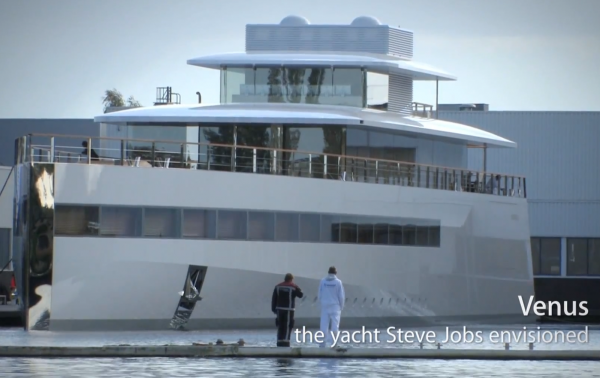 Towards the end of Walter Isaacson's authorized biography, Apple founder Steve Jobs talks about a self-designed boat he’s having built for himself and his wife Laurene. He shows Isaacson his models, and architectural drawings, and of course it’s a typical Jobs affair, with obsessive attention to detail: In order to realize the idea of having walls of glass "forty feet long and ten feet high" Jobs gets the chief engineer of the Apple stores to create a special type of glass capable of providing the necessary structural support.

Prophetically he tells Isaacson, after admitting he’s still tinkering with the design even though construction has begun, "I know that it's possible I will die and leave Laurene with a half-built boat. But I have to keep going on it. If I don't, it's an admission that I'm about to die". He did sadly pass away before the yacht was completed, but a year later his creation, named Venus, has been unveiled at a shipyard in the Netherlands.

According to the Dutch website OneMoreThing, the yacht is between 70 and 80 meters in length, with an "exterior entirely made of aluminum so the ship is much lighter than other yachts".  The decks are fashioned out of teak, there’s a sun terrace with a Jacuzzi, and the bridge is equipped with seven 27in iMacs. But, presumably the crew won’t be using Apple Maps for navigation.

The yacht took six years to design and build (Jobs worked on some of the details with French minimalist designer and architect Philippe Starck) and everyone who was involved in the vessel’s creation received an inscribed iPod Shuffle from the Jobs family as thanks.

You can watch a video of Venus’s unveiling here.