Mr. President, could you save BlackBerry from that Finnish company? 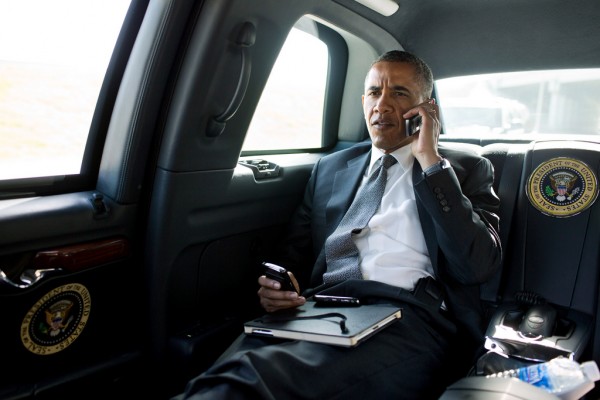 I have a special request for you, President Barack Obama. Intervene on behalf of a great American institution. Surely all it takes is an executive order. You bailed out General Motors and the banks, something you reminded all of us during your reelection campaign. Surely you can come to the aid of a company dear to you. Research in Motion has a big problem. Nokia asks courts in Britain, Canada and the United States to ban BlackBerries, because of a contract dispute. You have the power to stop this travesty before it starts.

We all know how you feel about BlackBerry; after becoming president you fought to keep your RIM smartphone and won. BlackBerry security protocols are good enough even for our Commander-in-Chief. You're an addict and make no secret of the fact. Hell, there have been rumors among hacker communities for years that you are a frequent poster on some CrackBerry forums. You're a fanboy, Mr. President. Now is time to put your loyalty to practice, by saving the tech you love so dearly.

RIM surely needs your help. BlackBerry bleeds market share -- it's more like venting an artery. During third quarter, BlackBerry's share of the global smartphone market fell to 5.3 percent from 11 percent a year earlier, according to market research firm Gartner. The platform is hurting bad before a new hope arises. Analysts predict that BlackBerry 10 will bring a big turnaround for RIM in 2013. Nokia's court gambit risks the future. BlackBerry can't rise again, if stopped at the border.

Our border. Our neighbor. Our country. Everyone knows that Americans think of Canada as the 51st the state -- the one progressive enough to adopt Obamacare decades ago. Canadians are just like us -- they belong to us. So surely you have the authority to act on behalf of a great American Canadian company. Might I suggest nationalizing Hockey Night in Canada and removing Passport restrictions between Washington State and British Columbia for Alaska-bound traffic?

Nokia isn't us. Until Microsoft sold Windows Phone's soul to the Finnish-handset maker, most Americans didn't know what Nokia was. Sure, travelers saw the brand everywhere internationally. But on these shores, proud Americans like you bought Canadian. They love their BlackBerries, and true believers like yourself remained loyal even as the platform declined before home-grown greats Apple and Google. Today, Android and iOS have combined 86.3 percent global smartphone OS share, according to Gartner.

If Apple and Google are first sons, surely RIM is second one -- the beloved adopted child, foreign-born like yourself. Republicans told us for years that your Hawaiian birth certificate isn't real -- ah, is it? Let's skip the birthplace debate and get to what matters: You're a true American at heart, just like other BlackBerry users. True Americans protect their Canadian friends. I know you have an iPad now, and there are rumors about an iPhone for your second term in office. But today it's still BlackBerry, eh?

While you're at it, why not do a TV commercial supporting RIM? As a dedicated BlackBerry user you command respect -- that and being president. Make a good-will "friends across the border" pitch, showing America's thanks for the great tech companies Canada produces. It's all in the interest of free trade and even preserving American jobs (you did tell us how important they are during your reelection bid). Earlier this month, RIM laid off about 200 employees at its US headquarters in Irving, Texas. Imagine the impact on American jobs if BlackBerry sales are blocked.

What a bogus request to block sales, too. Nokia demands our country's intervention because of Wi-Fi royalties. I read on some blog somewhere about FRAND -- you know, fair, reasonable, and non-discriminatory -- licensing of patents over essential technologies. The blogger said that companies owning essential patents are expected to practically give them away -- and some really do. I know this must be true, because I read it on the Internet and a dozen people I met during a Facebook-organized flash mob agreed. One of my BFFF's dads is a lawyer, like you, and he knows about complicated stuff like this. (So you don't have to feel embarrassed asking your daughters, Mr. President, BFFF is best Facebook friends forever.)

Surely there is no American justice in blocking BlackBerry sales over something so basic, so widely-used as Wi-Fi. The courts may not do the right thing, Mr. President, but you can. You must, because there is no more important BlackBerry user than you -- leader of the free world.

Editor's Note: Now don't take it all too seriously, readers.

19 Responses to Mr. President, could you save BlackBerry from that Finnish company?