Disable the new Windows 8 interface for good with Ex7ForW8 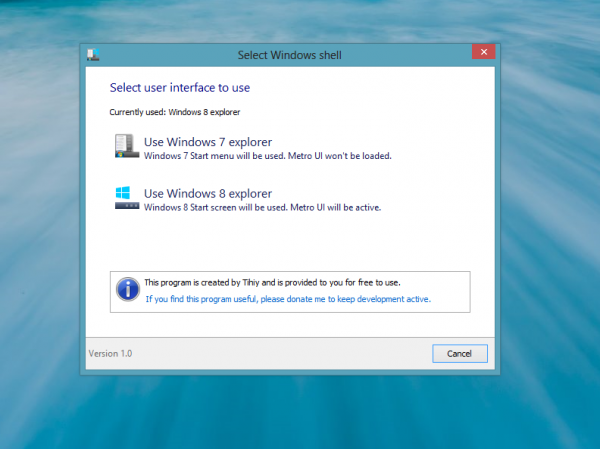 Microsoft might want all users of Windows 8 to use its new tiled interface, but if you really don't like it, or it's the one thing that's preventing you from switching to the new OS full time, there's a clever hack which will disable it for good -- or until you want to switch back, at least.

Ex7ForW8, or "Explorer 7 for Windows 8", is a wrapper created by a developer named Tihiy which basically allows Windows 7's explorer.exe to run on the new OS. Once installed and activated it will take users straight to the Windows 7 desktop upon boot up, and when I say "straight to" I mean it. The new UI doesn't load at all. The wrapper doesn't modify any system files or system protected registry entries, and you can switch back to the Windows 8 UI at any time.

Ex7ForW8 lets you enjoy all the benefits of the new OS -- faster boot up times, better security, SkyDrive integration and so on -- and new Explorer features, such as the ribbon interface, and enhanced file copying/moving are all still available. Only the Start screen formerly known as Metro is missing. And because the tool loads the Windows 7 shell, you'll get the Start button and Start menu back.

Of course disabling the Start screen also disables any Windows apps you might have installed, but you'd expect that, right?

I've actually been using this tool since the latest version was released in the middle of November, and so far I've experienced no problems at all. I miss the multi-monitor taskbars, but that's a small price to pay. I really like the new Windows hybrid the app creates, and the fact I can quickly switch between the Windows 7 and Windows 8 shells via the Start menu means I can still use the Windows 8 interface and access my apps whenever I need to.

The tool is very easy to install, you just run the  Ex7ForW8_setup.exe file and follow the instructions. You will need to have a Windows 7 installation disc or files on hand though.

Removing the app afterwards (should you choose to) is just a matter of uninstalling it via Programs and Features.