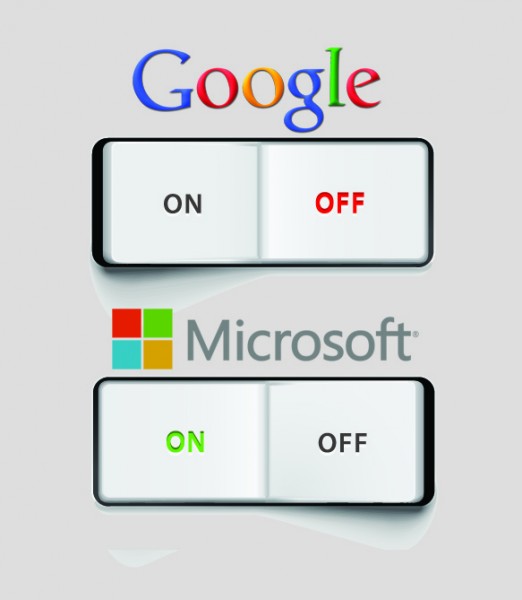 A week ago, I had a dream. I was sitting on a beach with a glass of wine and a laptop and I was searching the internet using Bing. My wife came up, saw what I was doing, and said "Why aren’t you using Google?" To which I replied, "I’m boycotting it. The company shutdown Reader." Yes, that’s right, I dreamt Reader was being shuttered before Google even announced it, and now I’m using Bing. Spooky or what?

But let’s make one thing very clear here. Although I plan to switch to using Microsoft’s services for a while, it’s not a boycott. I realized, after the dream, that I’ve been so tied into Google that I’ve never really given Microsoft’s alternatives -- Bing, Outlook.com, Bing Maps, and even Internet Explorer -- a fair chance to see how they compare. I've used them, in passing at least, but I've never used them full time. And today that’s about to change.

From now, I’m going to start using Outlook.com as my primary email account (still using my Gmail addresses to send and receive messages of course) and Internet Explorer as my web browser. Having only just really made the full time transition from Firefox to Chrome, that will take a while to get used to.

I’ll be searching exclusively through Bing, which is easy as it’s the default in IE anyway, and using Bing Maps instead of Google Maps. I already have SkyDrive set up through Windows 8, so I’ll switch to using that entirely, in place of Google Drive. Where there’s a straight replacement for an occasional Google service -- Bing Translator, for example -- I’ll use that. My aim, really, is just to fully immerse myself in Microsoft’s services, and to get a real idea of how they compare.

Change Can Be Good

A few years ago I was a die-hard iPhone user, but then I switched to a Galaxy S II, and then to an S III, and while I still own (and love) my iPad, I can’t see myself ever going back to the iPhone -- well not without a huge incentive. Because I use my Samsung phone all the time, I’ve become so used to how it works, what features and apps are where, that switching back to an iPhone will seem like a retrograde step. The same is true with Windows 8. Although the OS could stand a lot of improving, I’m used to it now, and prefer the way a lot of things are done in it. When I switch back to Windows 7, it seems odd and (admitting this feels weird) not as good.

I’m thinking by committing myself to Microsoft’s services, forsaking Google’s, I might -- just might -- end up preferring at least one if not more of them. I might discover features and ways of doing things that are better and that I will miss if I switch back to Google.

Or I might end up realizing just how much better Google is at everything. We’ll see.

I'm not the first BetaNews writer to try giving up Google. My colleague Joe Wilcox did something similar two years ago. Worried that he’d sold his soul to the Mountain View, Calif.-based company he tried to swap as many Google products for alternatives, including Microsoft services. Ultimately he failed.

Because my plan isn’t a boycott, or -- like Joe’s idea -- an attempt to entirely remove Google from my life, I will still use some of the big G’s products. I have an Android phone and won’t be swapping it for a Nokia Lumia. Microsoft doesn’t have anything that competes with YouTube (aside from Bing Videos), so I’ll have to stay with that. I use Google Reader religiously, but I may take the opportunity to switch to Feedly, because I’ll have to at some point anyway, so it might as well be now.

These are the Google products I intend to try and replace with Microsoft ones.

In a month, give or take, I’ll report back on how I got on, and what -- if anything -- I learnt from the experience and which Microsoft services I loved and preferred, and which I couldn’t wait to give up. In between then and now I’ll also report on any discoveries I’ve made. Like, for example, the fun that’s involved in switching from Gmail to Outlook.com full time.

I’m curious though, have you switched from one of Google’s products or services to a Microsoft alternative, and if so which one(s). And what made you change? Comments below please.