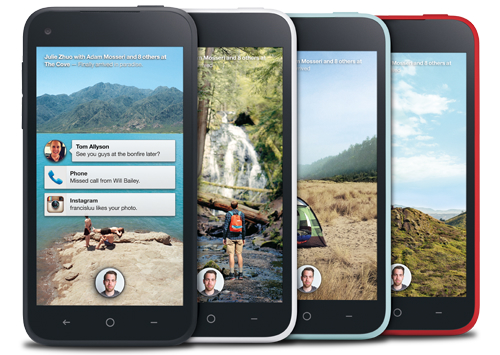 Well, the rumors were false. Facebook didn't release a phone today, not that I'm surprised. There are reasons why we write so few rumor stories here at BetaNews -- they often are false. "We're not building a phone. We're not building an operating system", CEO Mark Zuckerberg said early this afternoon. But the social network has launched an OEM program for the new Facebook Home, which displaces the default Android start screen. HTC is first partner. Aptly named then, the smartphone is called HTC First.

Preorders start today, and the device will be available exclusively from AT&T, in four colors (black, pale blue, red and white), on April 12. Facebook Home, which also will be downloadable same day for HTC One X and One X+ and Samsung Galaxy S III and Note II, is First's default experience. Essentially, the social network becomes primary user interface on top of Android.

First sells for $99.99 with 2-year contractual commitment. By the specs, the smartphone is no screamer. Modest feature set includes 4.3-inch display, Qualcomm Snapdragon 400 dual-core processor, 4G LTE and Android 4.1. The preorder page is, as I write, a dead link. (How can you not laugh at that?)

Ralph de la Vega, AT&T Mobility president, claims that the "best device for Facebook Home is the HTC First". I look at the other supported smartphones, which include HTC One and Samsung Galaxy S4 when available, and wonder: "Who is he kidding?"

Those specs look pretty good for a $100 phone with or without Facebook as primary UI. I'll update when there is clarification that AT&T's model is less or the PR people are just incapable of getting specs right.

Update: The preorder page is now live and gives the 4.3-inch screen, and HTC lists both. Strike-outs and changes are reflected above. Features are modest compared to other smartphones capable of running Facebook Home.

As for the Facebook experience, Home runs atop of Android. Zuckerberg observes that the three-decade-old current computing puts apps first, which, he claims doesn't make sense for personal devices like smartphones and tablets. What if they were "designed around people not apps?" he asks. "It would feel very different".

Home presents Facebookers with Cover Feed, a bleeding edge-to-edge view into the latest posts. Users can view or interact, including tap to Like. There's a real personal publication feel to the presentation. Cover Feed works in conjunction with Notifications.

For communications, Home features Chat Heads, which is real-time messaging available from anywhere within the UI. Not to completely dismiss apps, there also is a launcher for accessing them.

"With Home available right out of the box, you're getting the best quality experience for connecting with your friends", Zuckerberg asserts. But out of the box doesn't mean out of luck everywhere else. Users of the above-mentioned other supported smartphones can download Facebook Home from Google Play starting April 12.