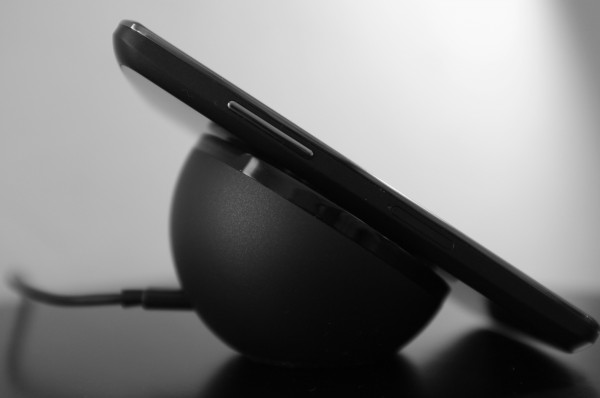 Gadget geeks love their toys, the more sci-fi the better. Several manufacturers offer wireless charging solutions, Google and LG among them -- for Nexus 4. The idea is simple: Rather than plug in the device, you rest it on something else connected to electricity. My question: If the phone lays down to charge anyway, why not just plug in and save, in this instance, $59.99 before tax and shipping?

I paid Google Play just that in a moment of weakness, and later regret. Don't bother, and that's really good advice. The Nexus 4 Wireless Charger is more than a wasteful, redundant accessory. The design is fundamentally flawed, where form goes before function to ruin. If you read no further, take away this: Save your money for something else.

Inductive charging is a fad that serves only one purpose: To con you to spend more money on needless accessories. You slap down the phone on a charger, which juices the battery in Stargate Universe-like fashion. What sets apart Nexus 4's add-on apart from others is the half-orb shape, utility and unwanted function as dust-mop.

Using the wireless charger is easy enough. You plug the USB cord into power brick and device, then set Nexus 4 on the half-orb's surface, which is Post-it note-like sticky. The adhesive is a huge problem, collecting particles like you wouldn't believe. Cleaning is difficult, since pieces of paper towel or cloth adhere to the surface. Suffice to say that the Nexus 4 Wireless Charger can look quite gross really fast, even when cared for.

Charging time is about 4 hours, just as the marketing material states. That's about twice the time my Nexus 4 takes plugged in directly. But I find the adhesive, while sticky enough for dust, isn't so good for the smartphone, which succumbs to gravity's pull. Just a little slippage is enough to stop charging. Strangely, in my environs, this problem typically occurs between 60 percent and 80 percent charge. So it's too common for me to check at 4 hours only to find partial charge and need to wait another hour or two after repositioning the phone.

For my purposes, and maybe yours, too, the USB cord is too short. I want to place Nexus 4 Wireless Charger high on my desk, but the cord won't reach the power strip. 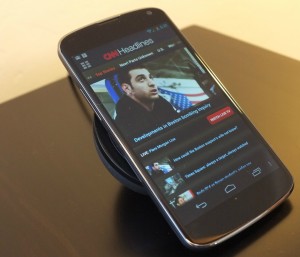 The half-orb nicely elevates the screen, so you can see notifications or easily answer calls with wired or wireless headphones. Two problems: Touching the phone can cause enough slippage to stop charging; the phone is otherwise inaccessible, because it can't be handled. When plugged into the wall, I can check Google+, respond to text messages or go through email -- all of which really needs me to pick up the phone. Voice activation is perhaps an alternative, but not something I tried for this review.

Bottom line: I see too many shortcomings and not enough benefits. The wireless charger's design -- too sticky for dust and not enough for Nexus 4 -- is a big problem, which could be remedied by using a flat surface and no adhesive. Then there is the inductive-charging concept. Connection to electricity is still required. You pass off the device to the wireless charger.

How wireless is it, really? Inductive charging requires contact -- surface to surface. Perhaps in the future there will be real wireless charging, and that has huge potential benefits. But that's not the tech LG and Google offer.

Longer charging time is another needless trade-off. Shouldn't you want to juice up as fast as possible?