About those Windows 8 ads...

There’s more than one way to advertise a product and while I am a big fan of the approach that specifically focuses on features, I understand there is a need for other approaches. Sometimes you just need to go for the pure emotional response. In the case of the ads released by Microsoft today which focus on the Asian market that seems to be what they were going for. Take a look.

I’ve been a critic in the past of Microsoft’s approach to advertising its various products. I’ve always felt they never did enough advertising and didn’t advertise at the right time (popular prime-time TV shows or big sports events) but that has changed. I’ve seen Surface, Bing, Windows Phone, Windows 8 and Outlook.com commercials during primetime, during the NBA playoffs, and even at random times on random networks on cable TV. Microsoft has definitely increased the frequency of its advertising.

However, I still have one problem. I’d still like to see more focus specifically on features of these products that make them better than the competition. Take the Surface commercials, for example. I absolutely love the way they first introduced us to the product: remember the commercial with the dancing school girls? Loved it. And now they are running a slightly different twist on that with dancing business users to introduce the Surface Pro. Almost six months on the market and all we know about the Surface is that it clicks -- and you can dance with it.

I think the general public is well aware that the Surface exists and if these commercials are primarily aimed to introduce us to it, then I believe they have so far succeeded. What we need now is not more dancers. What we need is to know why we should buy the Surface instead of an iPad. Tell us specifically in words why Surface is better.

This Amazon commercial may be one of my favorite iPad competitor commercials. In it, they focus on the displays between the two devices. They don’t say their display is better (because it isn’t from a technical perspective). Instead, they focus on the fact that the average person can’t tell the difference between retina and non-retina displays. Just as you’re about to say, “why would I buy a Kindle Fire?” they hit you with this: 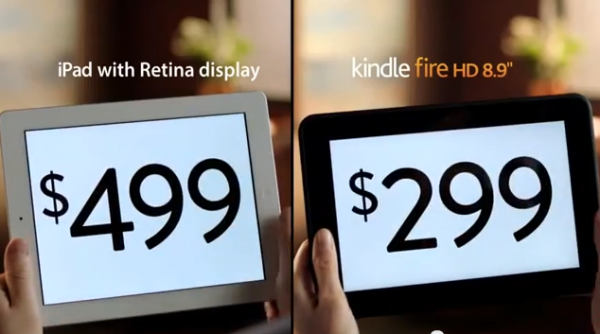 Why is the Fire better? Price alone is a major reason at $200 cheaper than an equivalent iPad. Amazon emphasizes the features that the general public can understand, screen and price.

Microsoft should step up and start advertising on features more. Windows Phone is doing this with the Smoked By commercials. They really should be running those around the clock in tandem with the new switcher ads. As Microsoft continues the transition into this new era of mobile, this becomes all the more important.

I heard a guy telling a story at work one day about how he used his Surface at a coffee shop and someone walked up to him and said, “Is that the tablet that clicks?” Incidents like this show that Microsoft is getting the word out. But people don’t quite know why the Surface is better. I had a conversation with a friend about Surface and why he should consider buying one, and his response was, “I already own a tablet to surf the Internet with”. When I told him why the Surface is not just a tablet, his perception completely changed.

This situation underscores the reality that people just aren’t aware what Surface actually is and how much more it is than just a tablet. If Microsoft can get this message out by focusing on features against competing devices like the iPad, people will continue to be confused. Even though Surface Pro is not even in the same computing category of an iPad, to the general user, it is.

Microsoft’s marketing is pretty good these days, but a slight change could result in a lot more sales of its mobile devices and really put it on the road towards dominating the next phase of mobile computing.

16 Responses to About those Windows 8 ads...