Microsoft CAN win the hearts of consumers 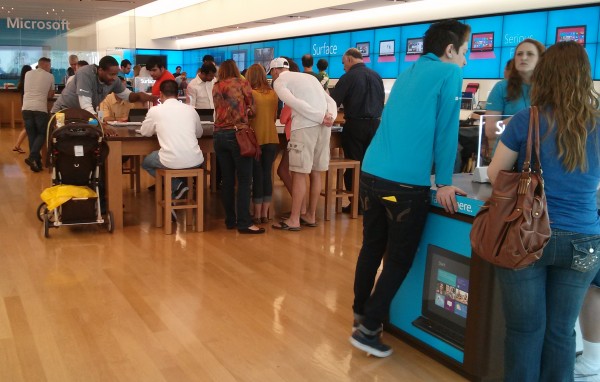 Many people want Microsoft to die, and the sooner the better. I’m not in that group, although I understand that years upon years of letdowns through viruses, DLL hell, BSODs (Blue Screens of Death) and a myriad of other problems lead many in the tech world (and consumer world, too) to walk away from everything Microsoft. Add to that the growth of the Internet and mobile devices as well as slumping PC sales, and you can see why so many wait with baited breath to see the company go away for good.

Nevertheless, quarter after quarter Microsoft continues to prove that it still has life and isn't going anywhere anytime soon. In fact, in 2011, CEO Steve Ballmer explained how the company intends to reinvent around devices and services. Seeing that the growth of mobile devices and the services that support them represent the future of computing, Microsoft responds yet again to the changing world of computing.

Personal digital assistants (PDAs) were introduced in the mid 1980s by Psion. These devices paved the way for the pocket PC where Microsoft was able to gain significant market share with Windows Mobile. Also popular during this time was the Palm Pilot and devices from other manufacturers like Blackberry, HP, Dell and Compaq.

While Palm was very effective at making inroads into the consumer world, it wasn’t until 2007 that things really took a turn. Apple introduced the iPhone. This wasn’t Apple’s first foray into the world of mobile computing. The Newton was a PDA device that was introduced to the world back in 1992 but wasn’t a blockbuster hit.

The iPhone quickly became a smash hit (once the price lowered). It was so successful I sometimes get the impression people believe Apple created a new market, which isn't true. The transition of mobile devices to the consumer arena was well underway when the first iPhone was introduced. What Apple did do was take an idea that already existed and make it a million times better. Microsoft did this in gaming with the Xbox.

Apple was able to get a huge lead against its competitors in the consumer space. How was this possible? I believe competitors saw the iPhone as just another “me-too” mobile device. However, Apple understood something that either its competitors didn’t or they simply were too slow to act on it and that is, the world was shifting to simple software backed by compelling user experiences. If consumers weren’t looking for it in 2007, the time would come where they definitely would. It just so turns out that consumers (young people) were actually ready for the shift.

I previously wrote about how I believe Windows 8 represents an understanding by Microsoft that there is a cultural shift happening that was affecting the way people use computing devices: a shift to a simplified experiences economy and this is the basis for why people are a bit confused and vexed by its Jekyll and Hyde interface.

A similar thing happened in 2007 with the iPhone. The economy of computing was in process of shifting from being services (not to be confused with software services as commonly used today) based to experiences based. In that article I explain what this means:

In a services economy an individual cares about goods but more importantly about the services surrounding those goods.

In an experience economy, services become the stage and goods are the props used to engage the individual in a conversation and immerse them in a story. Services are not enough because they are not as memorable as experiences. Goods and services all remain outside the buyer while for the first-time experiences allow companies to get inside buyers and manipulate them emotionally to purchase their products. Experiences are inherently personal. Through an experience an individual can be engaged not just on an emotional level, but on a physical, intellectual or maybe even a spiritual level. Experiences remain with the individual for some time to come.

Apple saw it coming and made the right moves. Its competitors didn’t.

I believe there is another shift on the horizon. In this shift experiences are still important but they are simpler. I previously wrote:

This simplified experience economy would be characterized by (1) a reduction in the number of devices consumers need to carry with them, (2) powerful (think processors) mobile computing, and (3) will be deeply personal.

I believe we’re moving towards a computing culture where users will do most of their work on one device. Let me explain.

The current mobile world is dominated by devices that are extremely limited in terms of computing capacity and processing power. These devices are mainly used for consuming content. To create content, users need more powerful devices like a laptop/desktop. Currently users have to carry around a phone/tablet device and a laptop or sit at a desktop to get all their computing tasks (consuming/creating) done. I’ve said before that the zenith of computing nirvana is to be able to not only consume content on today’s super thin mobile devices but create content on them as well, with no compromises. The result is that we carry fewer devices, which greatly simplifies our computing experiences. We’re not there yet, but Microsoft with Surface Pro has gotten us closer than anyone else in the market.

What makes this new computing economy deeply personal? The pervasiveness of more natural ways of interacting with these devices. If you’ve been reading my articles long enough you know I am a huge fan of natural user interface (NUI) technology. The more naturally we can interact with our devices the more personal they become. The ability to switch between input methods based on the real life situation or interface on the screen makes using devices so much easier. I often use the example of my Xbox 360. My couches love to eat my remote controls. So having the ability to use my voice to navigate the interface has been a big plus. A device that once had limited input is made easier to use by expanded input capabilities.

The simplified experience economy will be one where we can consumer and create on devices that can be interacted with in more natural ways. All of this will be made possible by extremely power processors.

I am convinced that we are entering a new phase in mobile computing. The first phase saw the introduction of the phone and PDAs. The second phase is characterized by the introduction of the iPhone. The third phase will usher in mobile devices with powerful processors capable of creating and consuming content and multiple input methods (mouse/keyboard, speech, touch, touchless gestures). All is made possible by a cultural shift to a simplified experience economy.

It appears that we are on the precipice of phase 3. With Windows 8 we are now starting to see the appearance of hybrid devices that operate as both a tablet and a full PC. These devices look like a laptop but the screens are detachable. Windows is the perfect operating system to run on these devices. It’s Jekyll-and-Hyde nature, while ridiculed by many, may be its greatest strength. What other OS on the market is capable of allowing users to consume content and create it all within the same device using powerful applications like Photoshop? None.

Surface Pro, while not particularly a hybrid device, is definitely a different take on the tablet. It by far is the best stage for Windows 8 and this new shift in computing. All of these devices allow users to work when they want, for as long as they want, wherever they want and however they want. Perhaps this is what Microsoft means when they call Windows 8 a system with no compromises.

Microsoft was a key player in phase 1, wasted away phase 2 and is well positioned for phase 3. I’m not at all declaring a winner especially since there is a lot to be said about the dominant position of both Android and iOS these days. But unless Google and Apple position themselves for phase 3, it’s not a far-gone conclusion that they could be playing catch up to Microsoft.

As we survey the current landscape of mobile computing it’s clear the market for computing devices is in transition from traditional computing devices like laptops and desktops to mobile devices like smartphones and tablets. It is in this current market that Microsoft is struggling to make sales. I often have been critical of the company and its apparent slowness to respond to the competition. However, I now consider the possibility that perhaps Microsoft sees something that most of us does not.

Microsoft officials have said that they see mobile as a long-term play, something more akin to a long journey. That doesn’t sound like the kind of language that should come from a company that believes the clock is ticking on a death watch. It’s quite possible that Microsoft sees the next phase of mobile and wants to get out ahead by giving time to develop and connect newly-built platforms. I don’t have a problem with this at all and in fact I think it’s a great strategy if in fact that really is the case.

There’s no way Microsoft can take down iOS and Android by creating devices and services that merely match parity with today’s market. Some may be more optimistic about Microsoft’s chances in today’s market, but I’m not. As I’ve argued before, the company needs to go beyond today’s offerings in order to really grab the attention of consumers with highly differentiated devices. Microsoft can win round 3 by improving the developer platform by getting as close as possible to write-one-run-anywhere, which should lead to better and more high profile apps, and finally through improving Windows Phone marketing. The new campaign, “Don’t Fight. Switch” is a great start!

Microsoft can win the hearts of consumers. It hasn't yet but I am pretty optimistic that if the company stays the current course, it will. It just won’t happen overnight. Today if you give people a choice, they most likely will not choose Microsoft. The next phase of computing is coming and for a company that traditionally does some its best work during a crisis, I’m not ready to say it doesn't have a chance.

86 Responses to Microsoft CAN win the hearts of consumers