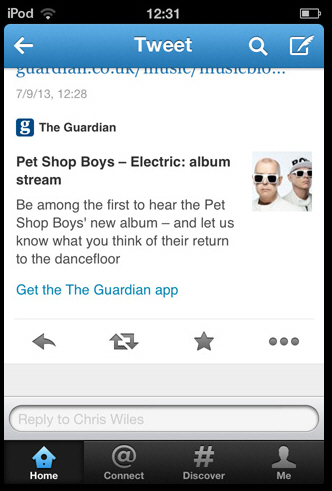 Twitter has updated both its iOS and Mac apps with the release of Twitter 5.8 for iPhone and iPad, and Twitter 2.3 for Mac. Both apps now correctly synchronize the read status of Direct Messages, which means when a DM is read on one platform, it will automatically be marked as read on others too, including TweetDeck 3.0.5 for Windows and Twitter 4.0.2 for Android.

Both updates also come with the promise of minor improvements and tweaks too, such as making it easier to join conversations via the iPhone app and richer search results that alert the user to new tweets matching their search terms.

The major improvements in Twitter 5.8 include making it easier for iPhone users to join existing conversations by way of a new reply composer that appears when in the Tweet details view. Users can now also find new accounts to follow more easily thanks to a New People button that appears in the navigation bar.

The promise of richer search results, which includes the aforementioned alert that flags up new tweets for previous queries, also gives users better account results, providing biographies and a social context for each result.

The iOS update is rounded off with the addition of a More button, allowing users to report unwanted tweets.

Twitter 2.3 for Mac comes with better notifications, alerting users to new followers, when their tweets have been favorited or retweeted, and notifying them when they’ve been added to a list in their @Connect timeline. Users can also now update their notification settings so interactions are displayed in real time.