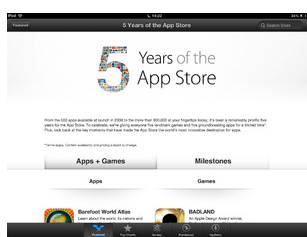 In the real world, when you have a birthday people give you gifts. But when these celebrations happen for software and services, the roles are frequently reversed. That is the case today as Apple celebrates the fifth birthday of its iTunes App Store by giving gifts to its customers.

A new anniversary section titled "5 Years of the App Store" is live now, and users can access it from the desktop app, or directly from iOS devices. Apps included in this section have been slashed down to zero in price, and include premium releases, such as the $19.99 Traktor DJ app, and hot games like Infinity Blade II.

The site announces "To celebrate, we’re giving everyone five landmark games and five groundbreaking apps for a limited time." The page also features an interactive look at big events over the five-year history.

As Apple states, these deals are "limited" so if you find something listed that is to your liking then today is the time to grab it. With more than 900,000 apps currently available, it's fair to assume we'll be seeing a "one million apps" celebration of sorts in the near future.