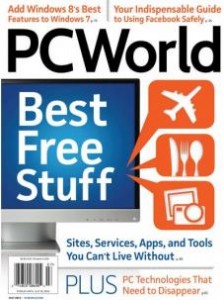 Print media is dying; some may argue it is already dead. With the launch of the iPad and the current industry trend of tablet media consumption, consumers don’t want to clutter their homes with stacks of paper magazines and newspapers. Not to mention, there is the trend of "going green" which is in conflict with the destruction of trees necessary to make print magazines.

Following these trends, PC World announces it is exiting the print magazine business to focus on digital editions. To be honest, it is surprising that a technology-focused publication even lasted this long in the print world.

PC World launched 30 years ago in 1983. To last that many years in any industry is a commendable feat. For many technology and PC enthusiasts, PC World has been a staple in their homes and offices for many years. It offered reviews and news in a wonderful package. Unfortunately, over time, it has shown that printed monthly technology magazines simply cannot compete with the instant news delivery of the internet and sites such as BetaNews. As a PC World print subscriber, I often found myself reading product reviews and news that were weeks old -- an eternity in "internet time". I still enjoyed the content but the untimely delivery made it less useful and stale.

But PC World is not dead. It will focus on digital delivery through its website, tablets and e-readers. I will gladly switch to the digital version using my Kindle. However, while the trend is digital, there is still a benefit to a printed version -- bathroom use. It is not uncommon to find a copy of PC World on my toilet tank. While I can bring a tablet into the bathroom, it just isn't the same. I will miss the print version.

The current print issue of PC World will be the last. Make no mistake; this is the end of an era. Truth be told, it is sad and a bit ironic that an Apple product, the iPad, sparked the trend that ultimately killed the print version of PC World. Luckily no staff on the magazine will lose their jobs, which is refreshing and unexpected news.

Will you miss the print version? Tell me in the comments.