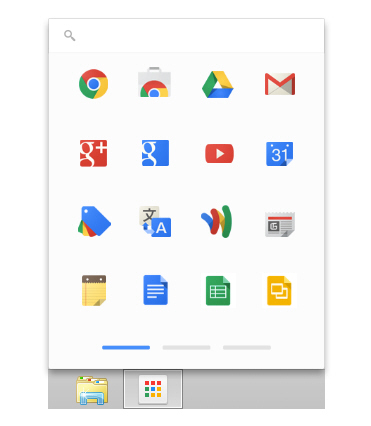 I am a big fan of Google’s Chrome OS. However, even though I use my Chromebook all the time, I am the first to admit that it is really just a glorified web browser. Truth be told, the operating system’s web apps are nothing more than links to web pages. However, packaged apps which resemble native apps (such as the great IRC client CIRC) are slowly increasing in quantity and quality.

Today, Google officially releases Chrome App Launcher for Windows. The launcher was previously available for the beta and dev versions of Google Chrome but it is now available for the stable build too. The launcher mirrors the one found in Chrome OS. In installing it, Windows users gain some of the same functionality as Google’s browser-based OS.

Once the launcher is installed, an interactive icon is displayed on the Windows taskbar. Clicking this will open a tray displaying all of the "installed" apps. The user can then select the desired one. There's also an icon for the Web Store which allows the user to add more apps.

In my use of the Chrome App Launcher for Windows, I came away very impressed. By signing in with my Google account, all of the apps listed on my Chromebook are also listed on my Windows machine. When I launch packaged apps, they look native to Windows. I particularly like that I can run Chrome apps and Windows programs side by side -- the line between native app and web app is truly blurred. If you are thinking of getting a Chromebook, or venturing into the world of Chrome OS, this will give you a little taste of what to expect.

Chrome browser users can install Chrome App Launcher here. Give it a try and tell me what you think.