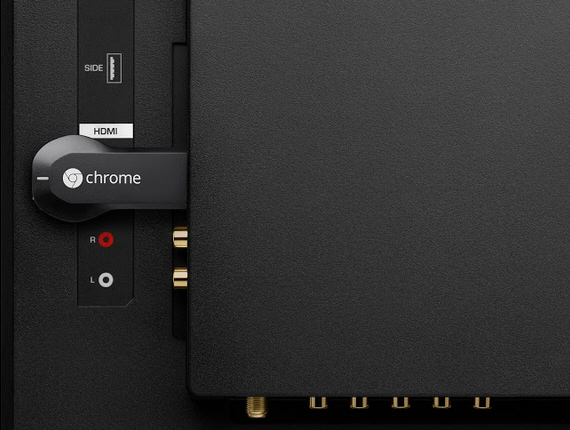 Yesterday Google announced a product called Chromecast -- a $35 HDMI dongle that’s essentially YouTube’s answer to Apple TV. While the event was more Googlish than Applesque (the venue was too small, the screens were too small, the presenters weren’t polished, and as a result the laughs and applause didn’t come) the product itself was astonishing -- or appeared to be.

The press picked-up on the most obvious headline item in the announcement -- the $35 selling price which drops to $11 if you factor in three months of free Netflix per dongle even for existing Netflix customers (now sadly dropped). That’s like Google attaching an $8 bill to every Chromecast -- something Apple would never do.

But the press -- even the so-called technical press -- seemed to miss some attributes of the product that were right up there in the "then a miracle happens" category. Let me list what stood out for me:

I don’t doubt that Chromecast can do number one. Though HDMI varies from TV to TV there is a base feature set required to even put the HDMI sticker on the set so this one makes sense to me. It’s the combination of 1 with 2 and/or 3 that had me scratching my head.

Very few TVs accept remote control commands through HDMI and even those that do aren’t compatible with each other, so turning on the TV or changing the HDMI input as shown were unlikely to work exactly as portrayed across a broad sample of TVs.

So what can this thing actually do?

This morning I asked around and found a couple folks in the consumer electronics space who either knew about the product directly (one guy) or knew the product space even more intimately (another guy). Here’s what they agreed on: in order for Chromecast to work with all HDMI-equipped TVs and do what Google demonstrated, the TV had to be already turned on with the display asleep and the Chromecast had to be the only HDMI device powered-up or (more likely) the only HDMI device attached to the TV.

In other words, while the product is still important and ground-breaking in many ways, at least some of the more exciting features appear to have been… demoware.

Most HDMI-equipped TVs that have a sleep mode will come to life if they detect a signal on any HDMI port. So the Chromecast isn’t likely to have actually turned on the TV as much as turned on the display.

Some (notice not most) HDMI-equipped TVs will switch the active input to, well, the input that is active. But this depends to some extent on the behavior of the other HDMI inputs and devices. The Cringely Boys have a newish 60-inch LED TV from Sharp with four HDMI inputs assigned variously to a satellite receiver (we live on a mountain remember), an xBox, a Roku and an Apple TV (sharing a smart HDMI splitter), and a PC. On this TV at least, with all of those devices attached and in their various sleep modes, I don’t think just using the remote to bring a single device to life (hitting the Apple TV menu button, for example) would actually switch the active HDMI input. At least it doesn’t for me, and this Sharp is a pretty representative higher-end TV.

So Chromecast is amazing, especially for its price point. It’s the functional equivalent of an Apple TV for a lot less money. If Google can come up with an equally radical content strategy this could be a game-changer for television (more on that in a future column), but looking closer the product simply isn’t as cool as Google presented it to be.

That makes no sense to me. Google could have been more honest about the features while improving the venue and the crowd to build buzz and get people watching the event later online. We could all be excited about the actual product -- thanks to showmanship -- not the idea of the product.

Or maybe I’m the one who’s full of shit and Google has created a miracle.