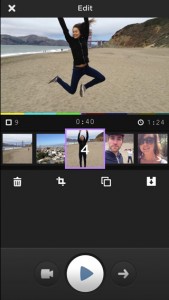 YouTube founders Chad Hurley and Steve Chen have launched MixBit for iPhone 1.0.3 through their company AVOS Systems. The app -- also coming to Android next month -- is aimed firmly at the social networking market, providing users with a convenient tool for constructing hour-long videos from 16-second clips that can subsequently be published on the parent Mixbit.com site or shared via popular social networks.

Mixbit.com is described as "a community of creators", according to its website, highlighting the public nature of videos uploaded to it. All shared videos become public domain, allowing other users to easily embed all or parts of those videos into their own work.

Creating the initial video is done one of two ways: users can shoot up to 16 seconds of video from their iPhone or select clips from publicly shared videos on Mixbit.com. These clips can then be combined to create a single video of up to 256 clips -- or around an hour in total length -- that is shareable a number of different ways: via Mixbit.com itself, Facebook, Twitter or email.

Individual clips are stored independently of each other, meaning they can be trimmed, rearranged, duplicated or deleted once shot or selected. However, all currently selected clips play as a single, seamless video, with a color bar below the video preview representing each of the clips for simpler navigation.

The app supports multiple video projects, and videos can be edited even after publishing or sharing. The user interface is built specifically for iPhone and iPod touch users, but will function on the iPad. An Android version is promised "soon", with an estimated shipping date of sometime in September.

MixBit for iPhone 1.0.3 is available now as a free download for iPhone, iPod touch and iPad running iOS 6.0 or later.