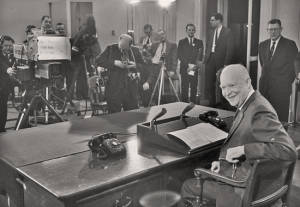 Fifty-two years ago, three days before he left office and retired from Washington, U.S. President Dwight D. Eisenhower addressed the nation on television with what he called "a message of leave-taking and farewell, and to share a few final thoughts…"

This came to be called Eisenhower’s military-industrial complex speech and was unlike any other address by Eisenhower or, indeed, by any of his predecessors. You can read the entire speech (it isn’t very long) here, or even watch it here, but I’ve also included below what I believe to be the most important passage:

Until the latest of our world conflicts, the United States had no armaments industry. American makers of plowshares could, with time and as required, make swords as well. But now we can no longer risk emergency improvisation of national defense; we have been compelled to create a permanent armaments industry of vast proportions. Added to this, three and a half million men and women are directly engaged in the defense establishment. We annually spend on military security more than the net income of all United States corporations.

This conjunction of an immense military establishment and a large arms industry is new in the American experience. The total influence -- economic, political, even spiritual -- is felt in every city, every State house, every office of the Federal government. We recognize the imperative need for this development. Yet we must not fail to comprehend its grave implications. Our toil, resources and livelihood are all involved; so is the very structure of our society.

In the councils of government, we must guard against the acquisition of unwarranted influence, whether sought or unsought, by the military industrial complex. The potential for the disastrous rise of misplaced power exists and will persist.

We must never let the weight of this combination endanger our liberties or democratic processes. We should take nothing for granted. Only an alert and knowledgeable citizenry can compel the proper meshing of the huge industrial and military machinery of defense with our peaceful methods and goals, so that security and liberty may prosper together.

The speech was an extraordinary warning from an old general about the very dangers presented by an overzealous military machine -- a warning as valid today as it was back then. Maybe more so.

This is the third and last in my series of columns on data security, this time looking forward and suggesting a note of caution. Just as Eisenhower predicted back in 1961, we stand today at the beginning of a whole new military industrial complex, one that promises to be bigger and more pervasive than any that came before. I call it the cyber trough because it’s where so many pigs will soon be feasting.

Wars are powerful tools for economic development. America emerged from World War One a superpower where it had not been one before. World War Two ended a great depression and solidified America’s role as a superpower for another half century. When Eisenhower spoke, the bogeyman was Soviet Russia compelling us to spend $1 trillion on nuclear arms and their delivery at a time when we didn’t even know as a nation what $1 trillion was called, much less how we’d raise it.

Just as Eisenhower predicted, there were a series of events, each engendering a new kind of fear that could only be salved by more arms spending. I’m not saying all this spending was wrong but I am saying it was all driven by fear -- fear of mutually assured destruction, of Chinese domination, of Vietnam’s fall, of the USSR’s greater determination, of the very fragility of our energy supplies, etc.

Each time there was a new fear and a new reason to spend money to defeat some opponent, real or imagined.

Then came 9-11, al-qaeda, and its suicide bombers. I had met Carlos, the Jackal -- the 1970s poster boy for terrorism -- and he wouldn’t have killed himself for any cause. This suicide stuff was new and different and so we took it very seriously, spending another $1 trillion (or was it $2 trillion?) to defeat shoe bombers and underwear burners and any number of other kooks.

Al qaeda changed the game, bringing the action home to America for the first time since Lincoln.

But now the trends that created the Department of Homeland Security and the Patriot Act have somewhat run their courses. Bin Laden is dead and if the military industrial complex is to endure and even thrive in an era of sequestration, we’ll need a whole new class of threats against which to respond and throw money.

Washington is gearing-up for cyber warfare. We will conduct it against other nations and they will conduct it against us. As always nations will be served by corporate surrogates and vice versa. But where in the past there was always an identified enemy and a threat that could be clearly targeted, the nature of cyber warfare is that small nations can be as dangerous as large ones and inspired freelancers can be the most dangerous of all.

And to the delight of the military industrial complex, this is one threat -- one source of national fear -- that is unlikely to go away… ever.

Here’s how a friend of mine who operates inside the Washington Beltway sees it: "The big move here in DC -- is to standardize cyber threats as a fact of life.  Total integration of cyber fear into the fabric of the economy -- cyber-insurance, etc. The building of the next cyber bubble is well under way. All of the beltway companies are embracing the opportunity with amazing haste. It is the ultimate business case for profitability and the profits will be astronomical."

Here’s the genius in this new threat: every country, every company, every technically smart individual can be seen as presenting a cyber threat. They’ll do it for power, money, patriotism, religion -- the reasons are as varied as the ethnicities of the practitioners.

But this time you see we can never win, nor can we even intend to. Cyber war will last forever. The threats will evolve, the enemies will be too numerous, and because we’ll be doing it too as a nation, there’s also the prospect of simple revenge and retribution.

The threat of cyber warfare will drive defense and intelligence spending for the next half-century. It will never be conquered, nor do the warriors really even want that to happen since their livelihoods would go away.

In a paralyzed Congress, cyber warfare will soon be the only true bipartisan cause even though it shouldn’t be a cause at all.

And this is what makes Edward Snowden so important. He’s at best a minor player revealing nothing so far that wasn’t already common knowledge, yet he’s being treated like a threat to global security.

If the intelligence community didn’t have Edward Snowden they would have had to invent him, his value as a catalyst for future government spending is so great.

If that crack about Snowden sounds familiar, remember it’s what Voltaire said of God.

Voltaire, God, and now Edward Snowden: Eisenhower was right! Prepare to be taken advantage of… again.