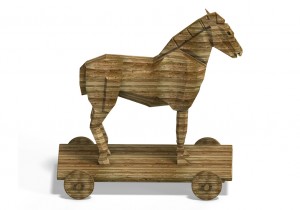 In 2008, the first Android smartphone was launched by HTC, named the Dream or G1, depending on the market. Android was able to capitalize on the iPhone's perceived shortcomings by offering the features that the iPhone didn't. However, fast-forward to 2013 and Android devices are slowly losing removable batteries and SD card slots. While Android is busy removing features, Apple has added them -- copy and paste. In other words, Google has slowly removed the features that differentiated its device from the iPhone. So, at this juncture, what is the point of Android?

In my opinion, Android has proven to be somewhat of a Trojan horse. On the outside, it appears to be a savior to the closed-wall ecosystem that Apple put up. On the inside, it is nothing more than a clone of iOS. Over time, locked bootloaders, non-removable batteries and non-expandable memory have been introduced, putting it on the same level as the iPhone. Sure, there are still devices that offer removable batteries and microSD card slots, but using the Nexus-line of devices as a barometer, it is clear that their days are numbered.

Whenever I discuss iPhone versus Android, the conversation inevitably comes to customization. Android fans point to the plethora of available launchers that can transform the UI to the one of your liking. This is similar to Linux distributions which allow different environments such as KDE, Gnome or Unity. However, in my opinion, too much customization is a bad thing.

Too little emphasis and appreciation is put on a shared experience. In the USA, on Thanksgiving, most people eat Turkey and on Halloween most kids dress up in costumes. These shared experiences are what bond people socially. Everyone who installed Windows 95 had a shared experience -- the Start button was in the bottom left corner, and people bonded to it. If Android users have a scattered experience, there will be less bonding towards the operating system.

It is for this that I applaud Apple. With the exception of Jailbreakers and Modders, iOS users have a shared experience. This is important, as it bonds users to the device.

Even having multiple-sized devices is a negative. While Android offers a large range of shapes and sizes, it makes buying a case or accessory difficult. Accessory designers can't properly design a high-quality case since it has to design them for so many different sizes. Ultimately, it is just the popular devices that get a good offering, such as the Galaxy S 4. While iPhone and iPad gets a huge selection of speaker docks, Android users don't since the microUSB slot could be anywhere. Even when Apple changes the dock-connector, it is on the bottom of the device.

I recently reviewed the Moto X and liked it very much. I even compared the hype to the original iPhone. However, it doesn't have a removable battery or an SD card slot. Somehow, this Trojan horse invaded my life and I did not realize it. Google slowly removed these features while dangling shiny things in our faces to distract us -- unfortunately, it worked. I made a choice to go Android years ago to combat Apple. Now I must wonder, why have the knockoff, when I can just have the real thing?

Google's apps often look better on iOS than they are on Android. If you live in Google's ecosystem, you may actually have a better experience on an iPad or iPhone than on a Nexus 4 or Nexus 7.

Sadly, with Android, past performance does not guarantee future results. We can never know when a feature will be removed. Anything you consider a benefit of Android over iOS today, could be gone tomorrow.